Battle of the Atlantic: The Admiral Graf Spee captures the 8,196 ton British freighter Huntsman on 10 October 1939 and puts a prize crew on it.

The British detain the US freighter Patrick Henry.

The British remove US mail destined for Holland and Belguim from the US freighter Black Gull.

Western Front: On 10 October 1939, there is artillery action and German reconnaissance between the Moselle and Saar.

General von Bock, who had commanded Army Group North in Poland, re-locates his headquarters for the newly renamed Army Group B to Godesberg.

Lithuania: In a Soviet-Lithuanian Mutual Assistance Treaty, Lithuania agrees to Soviet bases on its territory. In exchange, the Polish city of Vilnius that is historically Lithuania will be given to Lithuania, including accompanying territory. This is a backrolling of one of the territorial revisions that were part of the settlement of World War I.

Finland: The government orders a black-out in fear of air attacks. Civilians are evacuated from Helsinki and Viipuri (Vyborg) on a voluntary basis. The army begins maneuvers and begins bringing staffs up to full strength. Two divisions are deployed to the Karelian Isthmus.

Estonia: The Estonian government resigns. Uluots is the new Premier and Piip the new Foreign Secretary.

Poland: Hitler orders a General Government in Poland. This is popularly seen as a sham state that simply acts as another province of Germany.

Peace talks: French Prime Minister Édouard Daladier, in a radio address, rejects Hitler's peace offers and that France will continue to fight for assured peace. Agreeing to terms now "would only consecrate conquests by deceit or violence and would not prevent preparation for new ones."

British Government: Winston Churchill speaks before the House of Commons and advocates mining the Norwegian coastal waters, which are a supply route for German iron ore from Narvik.

Sir Kingsley Wood tells the House of Commons that there will be a doubling of aircraft production.

Two participants in the 4 September 1939 raid on Wilhelmshaven are to be awarded the Distinguished Flying Cross. 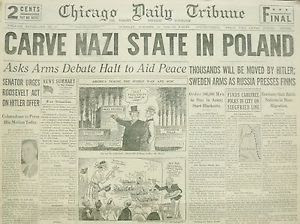