Western Front: The Germans launch some scattered attacks on the French lines on 19 November 1939, throwing grenades.

Battle of the Atlantic: More ships are sunk by the magnetic mines dropped by Kriegsmarine destroyers, but the U-boats have a big day.

U-41 (Kapitänleutnant Gustav-Adolf Mugler) torpedoes and sinks the 1,351-ton British freighter Darino near Spain. Eleven survive, picked up by the U-boat and transferred to an Italian steamer, and sixteen perish. It turned into extremely long and tedious stalking, as the U-boat fired three torpedoes over eight hours that all missed or malfunctioned. Finally, at 01:50, a fourth hits.

U-49 (Kapitänleutnant Kurt von Gossler) torpedoes and sinks 4,258-ton British freighter Pensilva near Spain. U-49 has been stalking convoy HG 7 out of Durban for three hours before it gets the right opening. Again, two torpedoes miss, but the third does hit the ship.

British ship Torchbearer hits a magnetic mine and sinks.

Kriegsmarine minesweeper M-132 is accidentally damaged by depth charges and, after being beached, is a total loss.

European Air Operations: Flights of Luftwaffe planes are spotted both in the southeast and near the Firth of Forth.

German Opposition: Rumors are running wild about the actions taken against the students in Prague. Up to 120 Czech students and teachers are claimed to be killed, with another 50,000 people arrested. It is all just rumor and conjecture, there are no hard facts being reported by any media sources.

British Government: First Lord of the Admiralty Churchill, wishing to retaliate for the success of the German magnetic mines, proposes using aircraft to drop mines in the Rhine between Strasbourg and the Lauter River and around the Ruhr stretch of the river. He wishes to make the former mines time-activated so they will float downstream and then blow up in the busiest section of the Rhine.

Luftwaffe: The prototype Heinkel He 177 V1, the Luftwaffe's only four-engine bomber (in two nacelles feeding only two propellers), makes its maiden flight. The flight must be cut short because of overheating engines.

Dutch/Belgian/German Relations: The Dutch and Belgians protest at incursions of their airspace by the Luftwaffe.

Japanese/Soviet Relations: Molotov signs an agreement with the Japanese ambassador to establish a commission to fix the border of Manchukuo, where the two nations recently clashed at Khalkin Gol.

China: Chiang Kai-Shek renews his quest for a Winter Offensive against the Japanese despite recent setbacks along the coast.

Holocaust: The Germans announce that they have erected walls around the Jewish Ghetto in Warsaw in order to better control the inhabitants.

The cornerstone ceremony is held for the FDR Library in Hyde Park, New York. It is the first Presidential Library. He places a "time capsule" inside. Despite his physical condition, FDR stands for the ceremony. 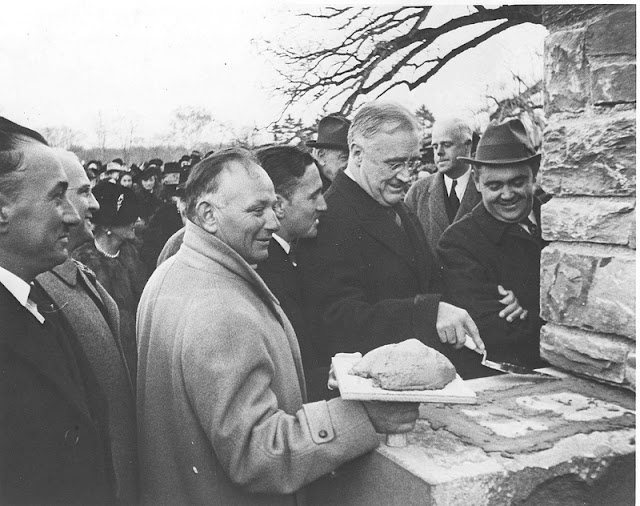