Battle of Poland: At Krasnobród, Polish cavalry of the Nowogródek Cavalry Brigade have assembled in some nearby forests. Early in the morning of 23 September 1939, they charge the town, which is located on a hill with and surrounded by anti-tank trenches. The German 8th Infantry Division is taken completely by surprise and fall back into the town. The Germans just so happen also to have cavalry at the town, and their cavalry responded but was beat back. The Poles, led by the The 25th Greater Poland Uhlan Regiment under Col. Bogdan Stachlewski, take the town and capture the Germans' commanding officer, General Rudolf Koch-Erpach. Both sides take tremendous casualties, but it is a huge boost for Polish morale.

The Germans announce the fall of Lvov.

The surrounded Fortress of Modlin and nearby Warsaw continue to hold out. Morale is high even as rations dwindle.

German Propaganada: The German government issues a statement that proclaims: "The Polish Army of a million men has been defeated, captured, or routed. No single Polish active or reserve division escaped this fate." It states that organized resistance in Poland has ended, but for a few holdouts "in Warsaw, in Modlin and on the Hela Peninsula."

European Peace Efforts: Mussolini, in a speech to fellow fascists in Rome, urges a cease-fire and a peace based on current frontiers. He also somewhat ominously states that the country must "strengthen our army in preparation for any eventualities." He does, however, reiterate Italy's neutrality.

Battle of the Atlantic: Two Finnish steamers carrying cellulose, the Walma and Martti-Ragnar, are sunk.

German/Soviet Relations: German Foreign Minister Ribbentrop tells his ambassador in Moscow, Schulenberg, that the time has come to sign a treaty for "the definitive structure of the Polish area" and that he is willing to fly to Moscow - again - to complete it.

German Navy: U-54 is commissioned.

Holocaust: The Nazis confiscate all radios in the possession of Jews.

British Homefront: Sigmund Freud passes away from cancer of the mouth and jaw in London at age 83.

Latin American Relations: The Panama Conference (held in Panama) begins. It establishes a maritime security zone for 300 miles around the Americas, to be patrolled by a Neutrality Patrol. All hostile submarines are banned from port.

The conference is formally titled "First Meeting of the Ministers of Foreign Affairs of the American Republics for Consultation Under the Inter-American Agreements of Buenos Aires and Lima.”

American Homefront: Cookie Lavagetto of the Brooklyn Dodgers goes 6 for 6 as the Dodgers get 27 hits and beat the Philadelphia Phillies 22-4. 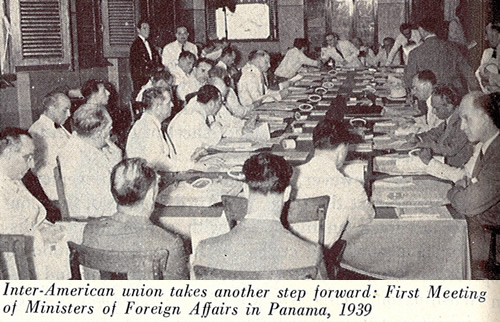