Battle of Poland: The Germans win the Battle of Brześć Litewski (Brest-Litovsk). After an advance of 100 miles in 8 days, General Guderian's XIX Corps takes the historic city of Brest-Litovsk. The Corps previously had advanced eastward in a lightning thrust from Germany proper to East Prussia across the Polish Corridor. The Corps then had reoriented its axis of advance southwards to strike across the Polish rear - to the east of Warsaw - along the River Bug. The XIX Corps remained in Brest-Litovsk until 22 September 1939, when Guderian handed the city over to the Soviets per the secret protocols of the 23 August 1939 Ribbentrop/Molotov Pact.

In Warsaw, the Luftwaffe bombs St. John's Cathedral. The dead are buried in public parks because the cemeteries are full and the Germans are blockading the city. 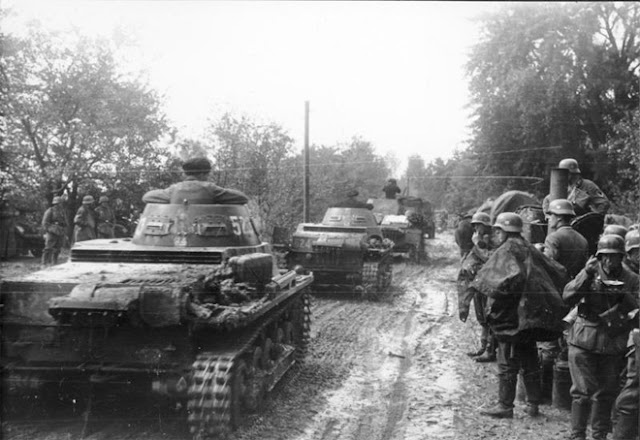 Soviet Military: Pursuant to the secret protocols of the 23 August 1939 Ribbentrop/Molotov Pact, on 17 September 1939 the Soviet Union invades Poland from the East. It is not fair to say that it is completely without warning, as the Soviets had broadcast their intentions on the previous day - but it is without provocation. The Soviets meet virtually no opposition.

Polish Government: With Warsaw already threatened and no help arriving from England or France, the government of Poland leaves Kuty, it's fifth Polish refuge, and encamps for Romania, which is still neutral.

Battle of the Atlantic: HMS Courageous, an aircraft carrier originally built as a battlecruiser during World War I, is sunk on the Western Approaches.  Captain-Lieutenant Otto Schuhart of U-29 spots Courageous while the carrier is on anti-submarine patrol and puts two torpedoes into her. Some 514-519 of 1200 crew perish. U-29, which only a few days earlier had been stalking the Ark Royal, escapes after four hours of depth charges. The incident illustrates for the Royal Navy the dangers of anti-submarine patrols and is another step on the road to the full convoy system. Courageous is the first British warship sunk by the enemy in World War II. Schuhart receives the Iron Cross First Class.

The British withdraw their remaining fleet carriers from anti-submarine patrols.

Italian Government: Italy offers Greece a guarantee that it will not take any military action against it.

Japanese Military: Japan launches an attempt to take the city of Changsha, Hunan after blowing through Chinese resistance led by the 184th Division of the Chinese 60th Corps.