Germany and England, Diplomacy: Adolf Hitler, a native Austrian, had a keen understanding of international relations in central Europe. He viewed the state of Czechoslovakia, formed out of whole clothe following World War I, as easy prey. It was composed of the old German provinces of Bohemia and Moravia and many - not just Hitler - saw it as a rump state that rightly belonged to Germany. There were 3 million ethnic Germans living in the so-called Sudetenland, a Czech region bordering Germany which comprised the country's prime defense zone against Germany. As part of his desire to reinstate the territories of the old German Empire, Hitler saw Czechoslovakia as a nuisance to be handled as expeditiously as possible, preferably without incurring a larger war which the German military - still re-arming - could not enter with confidence.

The 12 March 1938 Anschluss (German union with Austria) stoked the Sudeten people's desire to have the same happen to them. Throughout 1938, ethnic Germans under the leadership of gymnastics teacher Konrad Heinlein and his Sudeten Germany Party agitated for German intervention. While they may have had some legitimate grievances against the government of Prague, such as being under-represented in government jobs and the like, they were culturally free and lawful Czech citizens. Hyped stories of Czech intimidation of the Sudeten Germans began to appear in the German press, most or all of them fabricated or at least dramatically exaggerated.

Hitler, after much back-and-forth with the British, who were the Czechs' nominal protectors, decided that enough was enough. In late May 1938 he decided to invade Czechoslovakia under military operation Case Green. Case Green was scheduled for that October, with the intervening time to be used to exert diplomatic pressure on the Czech government and create distance between them and the British. For his part, British Prime Minister Neville Chamberlain also saw Czechoslovakia as a problematic flash point which could trigger a war with Germany for which the British public also was unprepared.

While Hitler continued his campaign of intimidation against the Czechs, including browbeating President Edvard Beneš, the British and Czechs gradually came to the realization that the situation was tactically hopeless. The Czechs knew that their only hope lay in strong support from the Western Allies who had created their state, and tepid British support gave them little hope.

The event culminated in the Munich Agreement of 29-30 September 1938, when Chamberlain flew to Munich and, along with representatives from France and Italy (but not Czechoslovakia), signed the infamous Munich Agreement (actually signed during the early hours of 30 September but dated the previous day). It gave Germany carte blanche to occupy the Sudetenland, which it quickly did by 10 October, in exchange for leaving the rest of Czechoslovakia alone. The British thereby avoided a war that Hitler also did not feel prepared for, at the cost of the integrity (and ultimately the existence) of the Czech state. The Munich Agreement led within months to the complete occupation of the remainder of now-defenseless Czechoslovakia by Germany and other nearby countries. 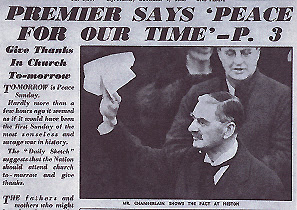 The Munich Agreement was a disaster for everyone but the Germans. The legend of "appeasement" that grew out of Chamberlain's attempt to prevent war by giving the aggressor Hitler what he desired remains a cliché - in fact, it is probably the most enduring one from the 20th century after the "Titanic" metaphor for total disaster. As for Germany, the Munich Agreement was one of Hitler's biggest and most unalloyed triumphs. He incorporated the former Czech state into Germany's expanding empire and got some excellent soldiers from the Sudeten population, most notably tank ace Kurt Knispel, along with important arms manufacturers and a quiet area relatively free from later Allied bombing raids.