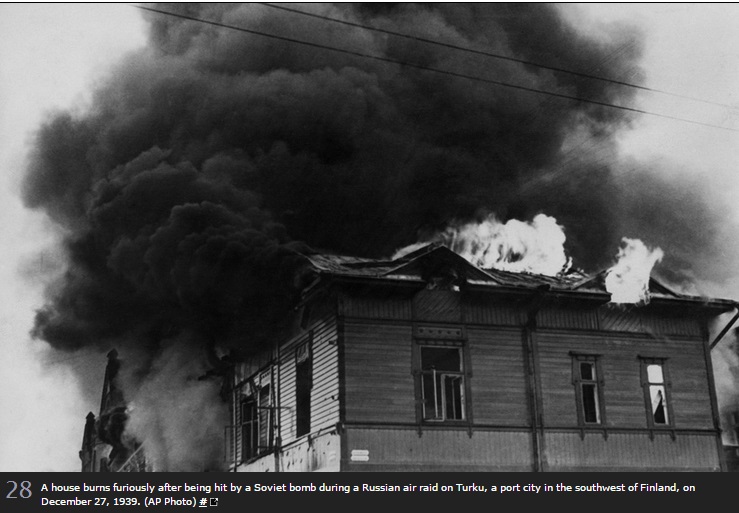 Winter War: Soviet casualties to date are estimated to be 30,000. International aid continues to pour into Finland, and Britain and France ask the Swedes for permission to ship it in through their territory. The port of Narvik is a handy entry point due to the rail line that runs from it, through Sweden, directly to Helsinki.

The Finnish troops around Suomussalmi receive two new regiments and go on the attack. The Ninth Division advances to within about 15 miles of the border and also advance on the village of Suomussalmi itself. The Soviet commander of the 163rd Rifle Division in the village, Kombrig Zelentsov, finally receives permission to evacuate the town. He prepares to sneak out the next morning.

General Siilasvuo decides to attack the Soviet 81st Mountain Rifle Regiment in Hulkoniemi. Four Finnish battalions break through the regiment's line. There is a wild scramble as the Soviets flee to their command post, and every man in the unit is defending his own square yard of ground. They and the 759th Rifle Regiment also receive permission to withdraw. Basically, all of the Soviet advance units in the area are bugging out, leaving the stranded "relief" force on the Ratte road, the 44th Rifle Division, in the lurch.

At Kelja, the Finns are counterattacking the Soviet beachhead relentlessly after receiving reinforcements from the Western Isthmus. Late in the day, with artillery support, they manage to infiltrate the sketchy Soviet positions along the shore of the frozen lake. After dark, the Finns clear out the entire beachhead. The Finns capture 12 anti-tank guns, 140 machine guns, 200 light machine guns and 1500 rifles, but their own losses in manpower are not insignificant. Troop transfers from elsewhere weaken the front because there is no manpower to spare anywhere. By expanding the board, even with horrendous losses, the Soviets are slowly draining the Finns of their scarce manpower. The Finns cannot win a battle of attrition.

The Soviets are still giving ground at Salla.

Battle of the Atlantic: The Royal Navy plans to seed a defensive minefield from Moray Firth to the Thames Estuary.

British Government: The government announces that it seized just under 7,000 tons of contraband in the preceding week.

American Government: The State Department sends a "vigorous protest" to the Court of St. James regarding the seizure of American mail bound for the Continent by the British.

The US Consul General in Hamburg states that the German authorities there have released all but 7 neutral vessels previously seized. At one time, there were estimated to be about 125 ships there.

Turkey: An earthquake hits at Tokat, Samsun and Ordu. Some 8,000 people are estimated to have perished.

China: In the Battle of South Kwangsi, in the last gasps of the Winter Offensive, the Chinese are still attacking the Japanese 5th Infantry Division. At the Lien River, the Japanese 21st Army crosses against light resistance from the Chinese 4th War Area. A Japanese force also counterattacks the Chinese 5th War Area near Chunghsiang.

Holocaust: At Wawer, a Warsaw suburb, two Wehrmacht noncommissioned officers are killed by Poles. The Germans retaliate by hanging the bar owner and shooting 120 Poles at random.