Winter War Army Operations: At 05:00 on 29 January 1940, the Finnish 9th Division attacks and ultimately encircles the Soviet 54th Division at Kuhmo. The Soviets had been moving forward slowly, but now the division is immobile. In any event, the division has no authority to retreat. Airdrops now are the Soviets' only means of supply. The Soviet government is turning its attention further south and leaving the operations above Lake Ladoga in abeyance.

Winter War Air Operations: The Soviets launch sharp air raids along the coastal towns on the Gulf of Bothnia. At Hango and Turku, two of their favorite targets, they cause extensive damage. At Hango, 50 perish and 200 are injured, whereas at Turku, 28 men perish and 46 are injured. In addition, the Soviet bombers, perhaps mistakenly, bomb the Red Cross hospital on the Karelian Isthmus, killing 23.


The Soviet Union has no objection in principle to a possible agreement with the Ryti government.

This appears to end the Soviet pretense that their puppet government staffed by former Comintern members is the "legitimate" Finnish government, which nobody took seriously anyway. The Soviets are preparing a major offensive, so the sincerity of this offer is highly suspect - unless the Soviets consider it to be a prelude to surrender negotiations. 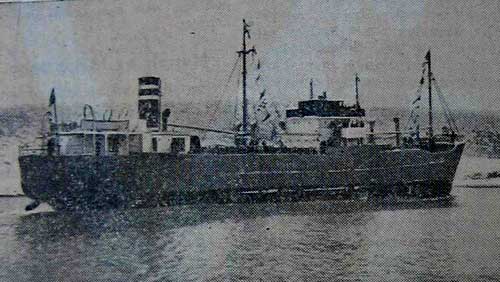 Battle of the Atlantic: The British Admiralty warns US ships not to enter the war zone previously established by President Roosevelt.

U-51 (Kapitänleutnant Dietrich Knorr) torpedoes and sinks 1,503-ton Norwegian freighter Eika south of Ireland out in the Atlantic at 15:00. Fourteen perish, 2 survive. Knorr states that he saw no neutral markings and that the ship was using a zig-zag pattern. At the last moment, he states, it aimed right at his U-boat and tried to ram it, so he had to sink it. The German Government sends the Norwegian Department of foreign affairs a note stating:


The circumstances leading to the torpedoing of the steamship Eika is a typical example of what the consequences can be for neutral ships when they do not pay heed to the German Government's repeated warnings against un-neutral or suspicious behaviour.

Knorr's account is disputed in all particulars. What is not disputed is that Knorr stops and carries the two survivors, Harald Støle (age 16) and Alfred Johansen, with him until returning to Bremerhaven. The two Norwegians ultimately get home after returning to port on 14 February and state they were treated well by the Captain and crew. There is a memorial in Stavern, Norway for the ship and its crew.

Luftwaffe Heinkel He 111 bombers sink two British merchant ships between the Shetlands and Kent, the Stanburn and the Leo Dawson (assumed to be the Luftwaffe). They also bomb the unarmed "East Dudgeon" lightship, killing seven of the eight-man crew when it capsizes near shore. There were other attacks on British shipping that damage and sink some smaller craft.

The British detain US freighter Exochorda at Gibraltar.

German Military: Admiral Raeder, who is leading the planning for Weserubung, declares the Friesian Islands as military security districts. All local inhabitants are removed.

German/Italian Relations: The Germans release Italian aircraft destined for Finland that they had detained.

French Homefront: Premier Daladier delivers another emotional speech in a national broadcast, stating: "Germany hopes to encompass our downfall by exploiting the weakness at home …" It is a common refrain from him, as he sees the internal enemy of communists working in conjunction with Stalin as a huge threat, perhaps even greater than the Germans.

Holocaust: The Polish Government-in-exile releases a report estimating that 18,000 Poles drawn from all segments of society have been executed in occupied Poland.

Future History: Katherine Ross is born today in Hollywood, California. She becomes famous in the 1960s as an actress in such films as "Butch Cassidy and the Sundance Kid." She remains active in the television/film industry as of 2016 in shows such as "Family Guy."