Winter War: The Finnish government announces on 22 January 1940 that it is forming a Foreign Legion composed of volunteers from around the world, including Estonian Lithuanian, British, French, German and Italian volunteers. Already, Swedish volunteers are flying bombing missions and others are on the front lines. Numerous British are flocking to help the Finns, including a young Christopher Lee.

Winter War Army Operations: Soviet 122nd Rifle Division of the 9th Army (Chuikov) withdraws further at Salla. The Soviets continue lobbing their 7,000 artillery shells a day at Summa. The Finns are losing men in this trench warfare that they cannot afford to lose, some 3,000 during the month. The Finnish artillery is short of ammunition and under orders not to counter-fire, but only to fire against direct ground attacks. The Soviet strategy obviously is to wear the Finns down in a battle of attrition before striking a strong blow at the strongest part of the line.

Battle of the Atlantic: U-25 (Kapitänleutnant Viktor Schütze) stops 2,589-ton Norwegian freighter Songa, searches the ship, finds contraband, disembarks the crew, and then torpedoes and sinks it.

U-55 (it is assumed) (Kapitänleutnant Werner Heidel) torpedoes and sinks 1,387-ton Norwegian freighter Segovia. U-55 apparently had quite a patrol, sinking numerous ships, but never returned.

US freighter Excellency is detained by the British at Gibraltar.

British Government: British Foreign Secretary Lord Halifax reprimands First Lord of the Admiralty Winston Churchill for his speech of 20 January 1940. In it, Churchill had suggested, among other things, that the neutral countries should essentially abandon their neutrality and join the fight against Hitlerism. This is interfering in foreign policy, Lord Halifax tells him, which of course is the business of the Foreign Office - not the Admiralty.

Norway and Sweden, in any event, ignored the speech. They are worried that following Churchill's suggestions would just invite invasion by Hitler. The French, on the other hand, would welcome more nations in the fight against Germany.

US Military: The Army and Navy conclude joint amphibious exercises in California.

British Homefront: The British Board of Film Censors adds newsreels to its domain. Previously, newsreels were exempt because they were constructed under tight time pressure twice weekly. Now, they must be submitted to the Ministry of Information in advance. A liaison officer is appointed to convey guidelines to newsreel producers, and an appointed editor must review all submissions. This is censorship, but, well, there's a war on.

American Homefront: The British Navy has three warships outside San Francisco Bay trying to round up the men of the scuttled liner Columbus, who were trying to get back to Germany by any route possible. Some already had made it to Japan, where the Asama Maru incident of 21 January had occurred. 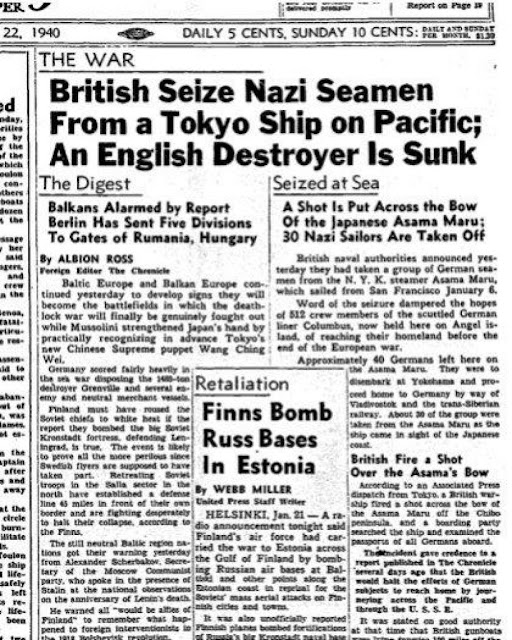