Winter War: The Soviets no longer take the Finns lightly by 15 January 1940. Whereas during the first days of the invasion in December they blithely waltzed in expecting no serious opposition, now they prepare their attacks more carefully.

Winter War Army Operations: Soviet heavy artillery opens up in sustained fashion on the Summa section of the Mannerheim. Such bombardments are typically a prelude to a set-piece attack, but such an attack is nowhere in sight yet. The bombardment provides the Finns no rest and damages their fixed fortifications (which are minimal anyway, such as barbed wire).

Elsewhere, the Soviet armies are largely on their own. Stalin has no big tasks for them, and instead is focusing on new, better-planned operations with fresh troops. Without attention and replenishment, the Soviet forces along the line are gradually weakening and making it easier for the Finns to carve them up into mottis (logs).

Mechelen Incident: The British respond to the Belgian request for guarantees first thing in the morning in a manner that is considered weak. The Belgians stop removing border obstacles on the French border. At noon, Premier Daladier tells Pol le Tellier, Belgium's ambassador to France, that Belgium must invite French troops into Belgium by 20:00 or he would pull all French and British troops from the border. The Belgians not only do not respond, but they begin replacing the barriers on the French border.

General Raoul van Overstraeten, King Leopold's military adviser, instructs the Belgian border troops to "repulse by force any foreign unit of whatever nationality which violated Belgian territory," which is not what the French were looking for. The Belgians also have given a negative reply to the same request previously by the British. Once again, the threat of a German invasion has not drawn the Allies together, but rather thrown them further apart. By forbidding the entry of French troops, the Belgians maintain their neutrality but also force the other Allies to rely on them for the defense of the section of the Front not covered by the Maginot.

On the German side, General Jodl of OKW advises Hitler that the weather is too poor for an invasion and it should be called off indefinitely, not just postponed for a few days now and again. Hitler, still set on an early invasion, decides to think it over and gives no firm decision.

Battle of the Atlantic: Around midnight, U-44 (Kapitänleutnant Ludwig Mathes) torpedoes and sinks the 1,590-ton Norwegian freighter Fagerheim southwest of Quessant in the English Channel. Five survive, 15 perish.

At 07:00, U-44 spots the 7,906-ton Dutch freighter Arendskerk.  The Dutch ship tries to outrun the U-boat but is stopped after 7 shots across the bow. The crew abandons ship, and the U-boat then shells the ship and uses one torpedo on it. All 65 crew survive.

Inter-American Relations: An Inter-American Neutrality Committee is formed, due to the Battle of the River Platte, to strengthen neutrality in the Western Hemisphere. It holds its first meeting in Brazil.

German/Danish Relations: The Germans request that the Danes blackout their island of Roenoe, which the British are using as a guide to the German base on Sylt. The Danes comply.

US Military: The army and navy conduct joint amphibious landing exercises in California.

China: The Winter Offensive has run its course for the 9th War Area, which winds down its attacks. The offensive has regained vital territory and brought down the Japanese government.

American Homefront: Admiral Byrd's giant snow cruiser is unloaded from the merchant ship North Star in the Antarctic. It breaks through the wooden ramp that is required to unload it, but once it is on the ground, its (unaccountably) smooth tires (designed for swamps) give it little traction. It quickly gets stuck. Experimenting, the team discovers that the cruiser is able to drive through the snow and ice - but only in reverse. Some exploration drives are made with it in that fashion - over very level ground.
Future History: The story of the snow cruiser is too good to just leave there. If you watch the footage in the above video carefully, you can actually see the wheels begin to lose traction the minute it is driven off the ship.

Admiral Byrd drove the beast - in reverse - for a few weeks. He covered up to 92 miles (148 km) in one journey. However, eventually, even in reverse the snow cruiser eventually gets stuck. Rather than attempt further heroic measures, Byrd just left it in situ and used it as a heated camp for his Little America 1- a function which it performed admirably, though burning a lot of precious gasoline. Byrd left it behind when the expedition concluded - and there it sits to this day, assuming the ice below it never melted. 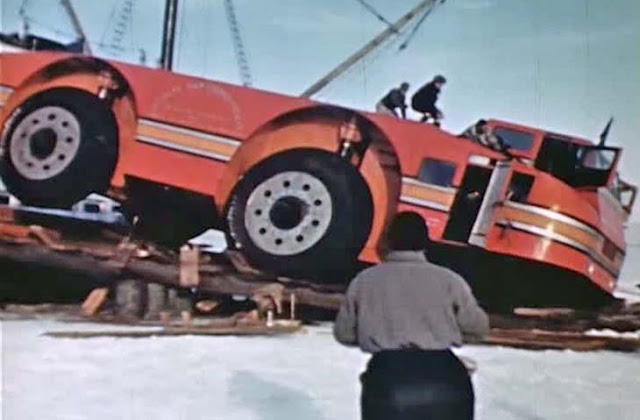