Norway: The British cabinet, given a strong recommendation on the morning of 28 April 1940 from General Massy, affirms the Military Coordination Committee (MCC) decision on 27 April to evacuate Norway. Everything is prepared for a quick exit.

Lieutenant General Claude Auchinleck is appointed commander of the British forces in Norway, now named the North-Western Expeditionary Force. He will oversee the evacuation.

Paget tells Norwegian Commander in Chief Ruge at 05:00. Ruge gets angry at both the decision and not being told previously. He still believes that the defensive 15th Brigade south of Dombås can establish a permanent line, but the decision is final. He offers to assist with the retreat as long as Norwegian troops are included in the evacuation.

The 15th Brigade at Otta holds its line during the day, destroying three German light tanks. During the night, it withdraws 25 north to Dombås, where it can protect its own flank. They conduct a scorched-earth policy, blowing bridges as they go.

General de Wiart in Namsos withdraws his forces into a tighter, more defensible perimeter as he prepares to depart. He faces Luftwaffe attacks only.

The French 27th Demi-Brigade de Chasseurs Alpins deploys on the mainland at Sjovegan, north of Narvik.

Having downed a German Heinkel 111 the previous night, RAF pilot Captain Partridge has crash-landed nearby. He finds a hut, then hears someone outside - it is the crew of the bomber he shot down. He invites them in, they become friends and are picked up this morning by a Norwegian ski patrol. 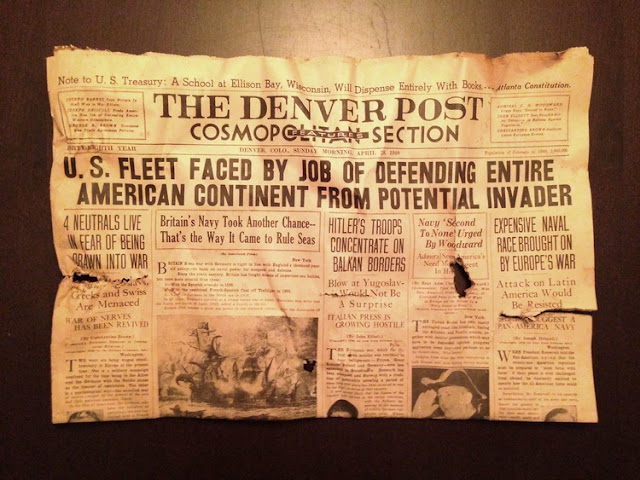 Battle of the Atlantic: The Queen Mary, impressed into British military service, completes a record-breaking, 12-day trip from New York to Cape Town.

American Homefront/Future History: John Cage, described as an "Avante-Garde experimentalist," debuts his "Bacchanale." It features his "prepared piano. The Seattle Daily Times describes "Bacchanale" as being "breathtaking in its speed and rhythm as well as unusual in its piano accompaniment." The National Academy of Arts and Letters will award Cage a $1000 honorarium - good money in those days - for the invention.