The Operation Wilfred minelaying squadron is approaching the Norwegian coast between Trondheim and Narvik. Destroyer HMS Glowworm loses a crewman overboard and stops to find him in heavy seas. It gets separated from the main squadron.

Troopship Nordmark sails into the Atlantic to wait off the coast of Norway.

During the night, a sea transport squadron leaves from Stettin with 15 steamers. In is taking 3,900 troops, 742 horses, 942 armoured vehicles. It is headed for Oslo.

Battle of the Atlantic: U-1 (Korvettenkapitän Jürgen Deecke) is missing and presumed lost as of this date. The leading theory is that it struck a British mine in Field No. 7. All hands are lost.

U-50 (Kapitänleutnant Max-Hermann Bauer) strikes a mine and sinks in the North Sea north of the Terschelling. All 44 crew perish.

German auxiliary cruiser Orion leaves Germany under the command of Korvettenkapitän (later Fregattenkapitän) Kurt Weyher. She is disguised as a neutral freighter and headed to the Indian Ocean.

British submarines HMS Truant and Seal depart from Rosyth, while HMS Tarpon heads for the Heligoland Bight. All are patrolling for German ships which are thought to be headed for Norway.

European Air Operations: "Operation Nickel," the leaflet campaign against the Reich, concludes. Begun on the first day of the war, Operation Nickel dropped 65 million leaflets and propaganda disguised as "newspapers" since 3 September 1940. The operation has received some public disdain as that "inglorious confetti war."

British Military: The French idea to bomb the Soviet oil fields remains alive at the highest Allied levels. Aerial photos recently taken of the fields arrive in London as the Generals decide whether to proceed with the operation. This is a "panacea" mission: "This will decide the entire course of the war." The tentative plan is to bomb 122 Soviet oil refineries over the course of 45 days.

War Crimes: The executions of Polish officers continues. Polish prisoners are taken to certain locations to be killed. At Kalinin Prison, they kill 390 on the first day, 250 today. The NKVD executioners find that they must pace themselves, the pace of killings is too great.

Holocaust: The persecution of Jews in Poland now extends to those in the provinces of Bohemia and Moravia (former Czechoslovakia). Jews are herded into synagogues as collection points, then put on trucks that will take them to Poland.

German Homefront: "Feuertaufe" ("Baptism of Fire") premieres in Berlin. Hermann Goering attends. The film glorifies the Luftwaffe attacks on Poland. Its theme song is "Bombs Over England," which has the pungent line,  "We drive the British lion to the last deciding battle.…"

The government recalls all 1, 2, 5 & 10 pfenning coins, which contain scarce and valuable copper and bronze. The replacement coins are made of plentiful zinc.

British Homefront: The Ministry of Food announces that the new rationing slogan is "The Kitchen Front."

Future History: Pedro Armendáriz Bohr, better known by his stage name Pedro Armendáriz, Jr., is born in Mexico City, Mexico. He becomes famous as an actor in Mexico in the 1960s, and gains international fame in the 1989 James Bond film "Licence to Kill." 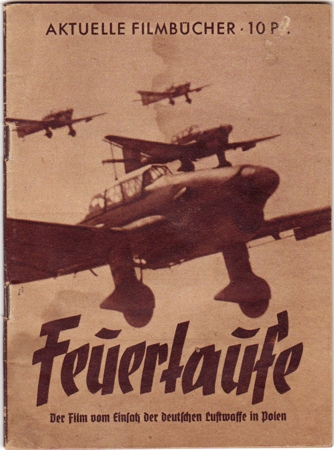