French Government: New French Prime Minister Petain, through his Foreign Minister Paul Baudouin, on 17 June 1940 has instructed his Ambassador to Spain to seek terms from Germany (and Italy). At 00:30, he broadcasts to the French people that "With a broken heart, I tell you fighting must stop":

Frenchmen, having been called upon by the President of the Republic, I today assume the leadership of the government of France. Certain of the affection of our admirable army that has fought with a heroism worthy of its long military traditions against an enemy that is superior in number and in weapons, certain that by its magnificent resistance it fulfilled its duties to its allies, certain of the support of veterans that I am proud to have commanded, I give to France the gift of my person in order to alleviate her suffering.

In these painful hours, my thoughts go out to the unfortunate refugees who, in an extreme penury, are furrowing our roads. I express to them my compassion and my concern. It is with a broken heart that I say to you today that the fighting must stop.

I spoke last night with the enemy and asked him if he is ready to seek with us, soldier to soldier, after the honorable fight, the means to put an end to the hostilities. May all Frenchmen rally to the government over which I preside during this difficult ordeal and calm their anxieties, so that they can better listen only to the faith they have in the destiny of the fatherland.

The French remain undecided as to whether to carry on the conflict from North Africa, where French possessions remain undisturbed. Italy, however, has large forces in Libya. The government is in a state of chaos. Petain (mistakenly) orders the arrest of Minister Georges Mandel on suspicion of staging a coup.

General Charles de Gaulle is in London with no authority and no troops. However, he has one thing the others in the French government do not have: British backing. He also has 100,000 French francs in gold, provided by (now former) PM Reynaud. One thing de Gaulle is certain of: he will not be serving any French governments on occupied French soil.

Western Front: While the French government wants an armistice, PM Petain is careful not to say in his speech how the Germans have responded. In fact, the German government is not ready to stop its wildly successful troops. Operations continue, with German troops advancing all along the front against largely nominal resistance. The French fortress of Metz surrenders.

Panzer Group Guderian reaches the Swiss Frontier south of Besancon at Pontarlier, completing the isolation of the 17 French Division of the Maginot Line. Otherwise, the front is so fluid and the German gains so extensive that the "front" no longer really exists.

The French 3rd Army Group is surrounded and on the verge of surrendering. News during the night of Petain's decision to negotiate robs the French troops of motivation. There also is massive confusion about whether the French government even wants its troops to continue fighting. Discipline disappears in some formations, with reports of looting by French troops. There are many luxuries, such as expensive champagne, to nullify the pain - and besides, the Germans will only take it themselves later.

Operation Ariel, the (third) evacuation of troops from France, is in high gear. This time, though, the Wehrmacht is in better shape to intervene than at Dunkirk.

The 16,243 ton British Cunard Liner HMT Lancastria (16,243 tons) (Captain Sharp) at St Nazaire is carrying an unknown number of soldiers - someone hears the captain say 6,700 are aboard. At around 15:45, sustained Luftwaffe bomber raids finally break past the defenses. Junkers JU 88 fast bombers strike the ship with three bombs, including one down the stack which blows a hole in the bottom, sinking the liner within 20 minutes.

Roughly 4-5,000 British, French, Canadian and Belgian men (and some women) aboard perish - the exact number cannot be determined. There are 2,477 survivors. The men on the doomed ship sing "Roll Out the Barrel" as the Lancastria rolls over on them. The Luftwaffe reportedly strafes the oil-slicked water, hoping to set the entire scene on fire and incinerate everyone, but this is completely unprovable.

The Lancastria sinking goes down as the worst British maritime tragedy of the war and, indeed, in history. It is the largest loss of life for the UK during the entire war and includes both soldiers and civilians. Churchill, reportedly weeping, issues what is known as a "D-Notice" on the Lancastria, which prevents any government official from communicating about it, even to the families of the deceased.

Elsewhere, the evacuation proceeds smoothly. Men of the 1st Canadian Division are taken off at St. Malo. In a mini-repeat of Dunkirk, private boats of the Royal Channel Islands Yacht Club of Jersey arrive to help ferry troops to the larger British ships.

At Cherbourg, the Beauman Division and Norman Force, both improvised BEF formations, leave in the evening. They are not too far ahead of advancing German forces.

At Brest, mostly RAF ground crew are taken off. With the evacuation completed, the French troops wreck the port facilities with assistance from British demolition squads.

Evacuations also take place from Nantes. It is 50 miles (80 km) up the Loire. There is a large fleet of destroyers and some larger ships available, but the British troops need time to get there. The RAF provides vital air cover to protect numerous vulnerable transports.

At Bordeaux and nearby ports on the Garonne River and nearby, Polish and Czech soldiers and civilians board the British destroyers after the Admiralty gives permission. There also are certain VIPs such as the President of Poland who embark here.

General Rommel has re-oriented his axis of attack once again. This time, he heads southwest toward Normandy. His objective is the key port of Cherbourg, which is the closest deepwater port to Great Britain. His troops face no significant opposition, and he covers 125-150 miles during the day.

Troop Convoy US 3, carrying troops from New Zealand and Australia, departs from Suez. 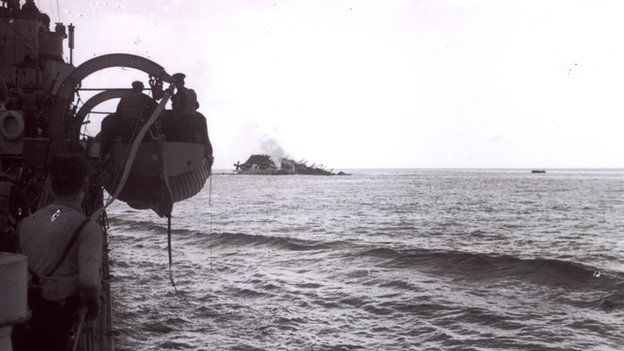 European Air Operations: The RAF sends 139 bombers to attack oil installations and other industrial targets in the Rhineland, Ruhr and northwest Germany.

Spanish/French Relations: Spanish Generalissimo Francisco Franco instructs his ambassador to France to demand the transfer of some French North African territory to Spain.

Soviet Government: Nikita Khrushchev is with Stalin as news of the French decision to seek terms arrives. He later recalls that Stalin is furious that France "rolled over for Hitler" - even though he purportedly is Hitler's ally. Khrushchev also states that while the rest of the world tries to figure out who is winning, Stalin just adds the German and French casualties together to see if he is winning. A quick German win is not what he wants.

Baltic States: Pursuant to the pro forma ultimatums delivered to the Estonian and Latvian governments on 16 June, The Soviets occupy the two nations. As anticipated, the western Allies - preoccupied with larger events - take no official notice of this blatant land grab. There is some scattered resistance, and the Single Signal Battalion holds out in Tallinn with no hope of succor.

A new puppet government is formed in Lithuania, which already has been occupied. President Antanas Merkys, who assumed power on 16 June, is arrested by Soviet authorities

China: At the Battle of Tsaoyang-Ichang, the Chinese 5th War Area recaptures Ichang in a seesaw battle. Japanese 11th Army, however, immediately recovers it. The Japanese 22nd Army captures Suilou west of Nanning on the road to French Indochina.

US Homefront: The British Purchasing Commission assumes French arms contracts and seeks additional contracts to purchase war material. This is done pursuant to the "cash and carry" rules. The French representatives, seeing the larger situation, give their consent.