Western Front: After the shattering Luftwaffe destruction of Rotterdam, the Dutch fighting spirit (at least among the leadership) dies on 15 May 1940. Dutch General Henri Winkelman capitulates at 10:15 in a formal signing at Rijsoord, a suburb of Rotterdam. The Dutch army is out of the fight except in Zeeland and isolated spots such as Walcheren Island and Beveland, where there are some holdouts. The Wehrmacht's 18th Army occupies "Fortress Holland," including Amsterdam, The Hague, and Rotterdam. There are some members of the Dutch Fascist Party on hand to greet them.

The mood among the Allies is bleak. At 07:50, French Prime Minister Paul Reynaud rings up British Prime Minister Winston Churchill to say: "We have been defeated; we have lost the battle ..... The front is broken near Sedan." Churchill, disturbed from sleep, awkwardly refers him to a similar situation during World War I that turned out well in the end.

Churchill later recounts the call to the War Cabinet: "I doubted the mighty French Army could be beaten so easily, but Reynaud seemed near-hysterical." The invasions are only five days old, but already they all are having outlandish success against proud countries that have spent heavily on their own defense for many years.

The Wehrmacht penetration across the Meuse gains force. General Guderian reaches Montcornet near Laon to lever open the gap between French 2d and 9th Armies. He is ordered to halt, and once again demands and receives permission to advance another day. General Rommel continues pushing southwestward toward Philippeville and passes through the Maginot Line extension at Sivry on his way into the French interior. Rommel faces little opposition and covers 40 km to Cerfontaine.

The French are off-balance, both in the field and at General Gamelin's headquarters. General Gamelin informs Defense Minister Daladier that the front is shattered. He replaces French 9th Army commander General Corap with General Giraud after the army collapses.

In Holland, Army Group B under General Fedor von Bock is performing its diversionary role brilliantly. In fact, Army Group B's stumbles only enhance the illusion that the battle so far is not going terribly for the Allies and thus they have more time than they really do, aiding the real thrust to the south.

German 6th Army under General Reichenau continues rushing westward (partly due to faulty military intelligence) and slams into the Allies' well-prepared Dyle Line. General Billotte commands the French 1st Army Group. Fliegerkorps VIII clears the way for an assault at 08:00. The assault by 3rd and 4th Panzer Divisions stalls in the teeth of fierce French artillery (French 75mm artillery and Hotchkiss 25mm anti-tank guns). The Germans take huge tank losses (some estimates say 250 tanks lost) and decide to wait a day before mounting a concentrated attack. It is a clear French defensive victory, but the French retreat during the night to the French border.

Col. Charles de Gaulle, an advocate of innovative strategies for the use of armor, is promoted to Brigadier General and given command of the improvised 4e Division cuirassée (4th Armoured). It is a new unit, formed on 10 May 1940, comprised mainly of tank battalions. This command complements de Gaulle's talents and serves as a good way to test his theories, which are similar to those of the panzer Generals. His first job is to set up a front at Laon.

Allied bombing attacks against the Meuse River crossings are completely ineffective, and the Allies lose over 50% of the planes committed.

Air Marshal Hugh Dowding, who has remained in office only due to the crisis, argues against reinforcing the RAF fighter presence in France. The French, of course, want "clouds of planes," but the British War Cabinet agrees with him. The decision taken by Sir Cyril Newall, Chief of the Air Staff, is for Air Marshal Sir Charles Portal to begin strategic bombing raids against Germany instead. This is a key moment when British and French interests begin diverging.

RAF Bomber Command thus mounts its first large-scale raid against the German homeland. It sends 95-100 Wellington, Whitley and Hampden bombers (sources vary) to attack the Ruhr during the night. They target oil installations, blast furnaces, and marshaling yards. They do not achieve many effects - only 24 of the bombers claim to have found their targets - and lose one plane. Most of the attacks - 78 bombers - are against oil-related targets.

Battle of the Atlantic: Most of the action is taking place just off the coasts of Holland and Norway.

Troop Convoy US 3 out of Australia is diverted to the Cape of Good Hope.

Norway: Polish troopship Chrobry is loaded with Irish Guards and Brigade headquarters headed for Bodø when the Luftwaffe attacks it off the southern Lofoten Islands. The liner is set ablaze, and the troops - 700 of whom are rescued - must be sent back to Harstad to be re-formed and re-equipped. The Guards show absolutely stellar morale during the sinking and are compared by the rescue ship's Captain to Rudyard Kipling's classic stoic-in-the-face-of-death Birkenhead Drill.


Anglo/US Relations: PM Churchill, who has been corresponding by telegram with President Roosevelt by signing his messages "Naval Person," now sends his first as Prime Minister, signing it "Former Naval Person." Today's message requests American aid such as old destroyers and aircraft, among other things:
Spies: The US Minister in Uruguay, Edwin C. Wilson, tells US Secretary of State Cordell Hull that fascist activities were increasing in the country. He notes that there is "indifference and apathy...and in certain cases something worse" to the fascist presence by the government of Uruguay.

Dutch East Indies: The authorities are rounding up a total of 2400 Germans and 400 members of the  Dutch National Socialist group.

Palestine" David Ben-Gurion is in London to talk with Colonial Secretary Lord Lloyd about the future of Palestine.

British Homefront: There is a massive civilian response to the broadcast of the previous evening calling for volunteers for the Local Defence Volunteers." Unfortunately, the police have received no uniforms or equipment for the volunteers yet. 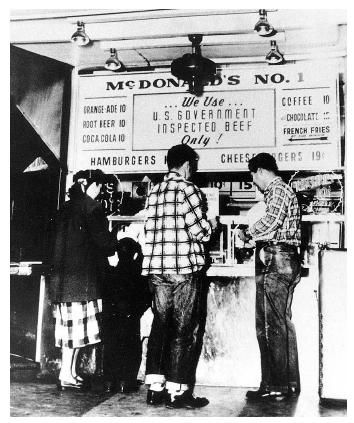 American Homefront: Nylon stockings have been a hot item, and today they appear in New York City - and immediately sell 780,000 pairs.

Richard and Maurice McDonald have the grand opening for the first McDonald's hamburger joint. It is located in San Bernardino, California.

Future History:  Lainie Kazan is born in Brooklyn, New York. She becomes famous on Broadway in the 1960s; poses nude in Playboy in October 1970; and becomes a huge television and film star.

Don Nelson is born in Muskegon, Michigan. He becomes a key player on the Boston Celtics basketball team (5x national champions) in the '60s and '70s, then a coach of the NY Knicks, Golden State Warriors, and other teams.