Western Front: With German troops approaching Paris on 11 June 1940 and little to stop them, British Prime Minister Winston Churchill and Foreign Minister Anthony Eden fly to France to confer with French Prime Minister Paul Reynaud and French Commander-in-chief Maxime Weygand at Briare (Weygand's headquarters in Chateau du Muguet). The French demand that the RAF send more fighter squadrons across the Channel; in fact, they ask for the entire Royal Air Force. The French believe this would give the French Army a chance to regain its balance, but the British remain cautious.

Churchill defers to Air Chief Marshal Hugh Dowding, who refuses to send more squadrons. Churchill renews his vow to defend France, but also strongly hints at his true view of the situation by encouraging the French to begin guerrilla warfare. He pointedly reminds the French of their 28 March 1940 agreement not to make a separate peace.

Churchill's true concern is the French navy, the fourth largest in the world. He wants assurances that it will not fall into German hands. Reynaud is exasperated and refuses to discuss the matter. At some point, French Navy Admiral François Darlan assures Churchill that the fleet will not be surrendered.

There is an air of unreality to the proceedings, almost as if everyone is just going through the motions and disconnected from the awful reality. French Marshal Pétain (84) interrupts the conference with his own take on strategy: "We don't seem to be making much use of carrier pigeons." According to Reynaud, Pétain has been busy drafting an appeal for an Armistice. The conference continues on the 12th. General Spears, along with Churchill, notes: "I was suddenly aware that the battle of France was over and that no one believed in miracles."

General Erwin Rommel and his 7th "Ghost" Panzer Division take Le Havre, then advance 30 miles further up the coast. This advance bottles up the 51st (Highland) Division and many French troops, a total of 46,000 men, at Saint-Valery-en-Caux. It is a mini-Dunkirk situation, but the foggy weather makes a British evacuation difficult. Royal Navy destroyer HMS Broke and corvette HMS Gardenia take off some wounded. Rommel takes positions on the cliffs overlooking the port, making Royal Navy visits extremely hazardous. The Allied troops hide in some caves, but many are on the beach under the night sky.

Wehrmacht troops of the 4th Army enter the distant Paris suburbs at Pontoise, northwest of the city. In addition, Panzer Group Kleist crosses the Marne at Château-Thierry. The German 18th Army is approaching Paris. Faced with an unstoppable pincer attack, the French government declares Paris an open city.

Battle of the Atlantic: With the Italians in the war, the British and French take quick steps to neutralize its navy. The Royal Navy (Admiral Andrew Cunningham) and a French cruiser squadron patrol the eastern Mediterranean from Alexandria and the Levant, respectively. In addition, Royal Navy cruisers bombard the Italian stronghold of Libya.

While the British and French are the most aggressive, the Italians draw first blood. An Italian submarine sinks cruiser HMS Calypso south of Crete.

U-101 (Kapitänleutnant Fritz Frauenheim) torpedoes 5,280 ton Greek freighter Mount Hymettus in the eastern Atlantic. When it does not sink quickly, it surfaces and finishes it off with gunfire. All 24 aboard survive.

U-46 (Kapitänleutnant Engelbert Endrass) torpedoes 8,782-ton British tanker Athelprince west of Cape Finisterre at 23:04. When the first torpedo does not sink it, U-46 fires a second torpedo that hits amidships and appears to doom the ship. After U-46 departs believing it has the kill, the Athelprince is salvaged, repaired and returned to service. All 59 crew survive. This is another example of large tankers being particularly difficult to sink.

British freighter St. Ronaig hits a mine and sinks in the North Sea.

Troopship Bruges (a Belgian transport attached to the Royal Navy) is sunk by Luftwaffe attack off Le Havre; all 72 crew survive, and the ship is empty of troops.

The US passenger liner Washington is en route from Lisbon to Galway, Ireland. It is packed with 1,020 US citizens collected from France and North Africa at the urging of the US State Department. U-101 sees it, surfaces, and orders it to stop for inspection. Kapitänleutnant Frauenheim at first thinks that the ship is Greek and prepares to disembark it and sink it. However, hurried blinker signal exchanges establish that it is American, and he permits the ship to proceed. It is one of the great unknown (except by people like us) instances of a U-boat captain avoiding huge loss of innocent life by strictly and correctly following the rules of international law.

Norwegian trawler Borglund picks up 37 survivors from HMS Glorious and 2 from HMS Acasta. 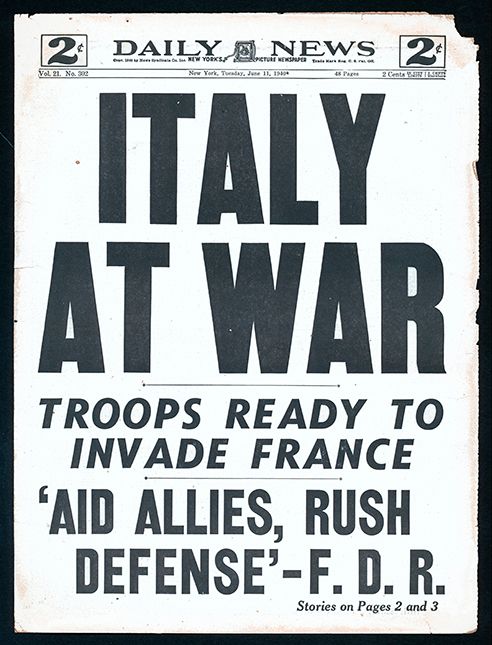 European Air Operations: The RAF in Egypt bombs Italian airfields in El Adem, Libya, while the South African Air Force bombs Moyale, an outpost in Abyssinia (Ethiopia). The British lose three planes, but destroy all 18 Italian planes on the ground.

In retaliation for the RAF raids, the Italian Air Force (Regia Aeronautica) sends a raid of 10 Italian Royal Air Force Cant Z.1007 Alcione bombers to attack Grand Harbour, Hal Far and Kalafrana in Malta. One civilian and 6 British soldiers (sources vary) perish, with 130 wounded. There are only 4 completely inadequate and obsolete Sea Gladiators to defend the island, and the Gladiators valiantly damage one of the attacking planes. This is considered the start of the "Siege of Malta." Three of the British biplanes are named Faith, Hope, and Charity.

Italy bombs the French naval base at Toulon. It also bombs French positions in Tunisia and a British base at Aden and one at Port Sudan.

The RAF bombs the German fleet at Trondheim, damaging two cruisers and a transport.

The RAF sends a night raid of 36 Whitely bombers against Fiat factories in Turin and Genoa, refueling in the Channel Islands. The raid shows typical poor aim for the period and instead hits the city center indiscriminately, killing 14 civilians. The Mussolini government widely publicizes this as an instance of terror bombing.

The French in Marseilles demonstrate seeming ambivalence, or perhaps outright despair, about the course of the war when they block runways to prevent their use by RAF Wellington bombers. Their apparent objective is to prevent Italian reprisal raids. Marseilles already has suffered damage in Luftwaffe raids, but Marseilles is a much easier target from northern Italy than from Germany.

The RAF drops incendiaries on the Black Forest during the night in an attempt to begin forest fires.

North Africa: Ground hostilities in North Africa commence when a British patrol raids Sidi Omar and the Italians also stage raids. The British 11th Hussars send armored cars into Libya and take some Italian troops as prisoners. The Italians do not even realize they are at war yet.

Anglo/US Relations: As part of his continuing correspondence with President Roosevelt, Churchill sends a telegram noting the Italian entry into the war, its submarine fleet (largest in the world), and reiterates his request for destroyers:


To this, the only counter is destroyers. Nothing is so important as for us to have 30 or 40 old destroyers you have already had reconditioned.

Anglo/Polish Relations: The two governments (Polish Government-in-exile) sign an agreement for there to be both a Polish army and navy in Great Britain.

German Government: Adolf Hitler gives an interview to German-born UP reporter Carl von Wiegand which is published a couple of days from now. Wiegand had been the first US reporter to interview German crown prince Wilhelm, the first interview given by a German noble during World War I, and Hitler references almost everything back to the Great War. This interview is entitled "Europe for the Europeans: Adolf Hitler on the international situation during the war in France; An interview granted to Karl v. Wiegand, Führer's Headquarters, June 11, 1940." Hitler expresses his desire not to destroy the British Empire, but instead to "destroy those who are destroying that Empire." He believes that US aid to Britain will not affect the outcome of the war.

US Government: In accordance with his obligations under the Neutrality Act, President Roosevelt defines the Mediterranean and parts of the Red Sea as combat zones.

Roosevelt expresses serious reservations with permitting the UK royals to transfer to Canada, fearing the public relations effect of allowing the monarchy to set up shop in North America.

French Homefront: The refugee crisis hits Paris, as long lines of traffic snakes out of the city with headlights dimmed, packed with gear, and mattresses on the roofs.

British Homefront: Clement Attlee, Lord Privy Seal, addresses the House of Commons about (among other things) the Italian entry into the war. He uses quite colorful metaphors, comparing the Duce to a "jackal" and a "sneak-thief":


Signor Mussolini thinks that he sees a chance of securing some spoils at the expense of the Western democracies now that they are at grips with the brute forces of Germany. Signor Mussolini uses the argument of the jackal which scents the possibility of getting some scraps from another beast’s kill. He puts forward the argument of the petty sneak-thief to rob and rifle the pockets of the murderer’s victim.

He concludes that Mussolini's aim, like Hitler's, is to "destroy democracy."

The British government extends its internment policy to include all male Italians, 16 and over, who have lived in the country for fewer than 20 years. There is no trial, and some are political refugees who fled Mussolini's regime.