German Government: Adolf Hitler on 23 June 1940 takes a typical victory tour after his conquest of France, flying to Le Bourget airport in Paris on short notice at first light. He tells nobody in advance, and the visit is a complete surprise to everyone around him and the German authorities in Paris. He visits the Paris Opera House - where he impresses the elderly guide with his knowledge of the building - and Napoleon's tomb at Les Invalides. Just like other tourists, he walks up Montmartre and stands to observe the city as bemused Parisians going to church walk by in astonishment. Imagine just walking by and seeing Hitler standing there! But that's what happened. Hitler has little protection, but his best security, as always, is his planned spontaneity which prevents possible assassins from planning an attack. That spontaneity and frequently changing his schedule on the fly saves Hitler's life several times.

After a few hours, he flies back to his headquarters, never to visit Paris again. "That was the greatest and finest moment of my life,” he says, ""It was my life's dream to be allowed to see Paris." His companions, architect Albert Speer and sculptor Arno Breker, professor of visual arts in Berlin, are there to get ideas about how to remake Berlin. Speer later notes that he hears Hitler say, "Compared to France, an invasion of Russia would be child's play in a sandbox." 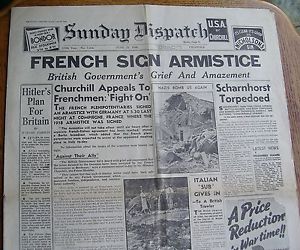 French Government: Charles de Gaulle forms the French National Committee. French officials are forced to choose sides between the "legitimate" Vichy government and the "continuation" de Gaulle organization - which has no legitimacy at all beyond the sheer force of his personality.

The "official" government of France, which remains very much in power, is not impressed by de Gaulle's freelance act. General Weygand is still the Commander-in-chief. He dismisses de Gaulle, who remains in London and technically is AWOL, in absentia. De Gaulle continues to call himself General de Gaulle as a self-described leader of the Free French.

Prime Minister Marshal Philippe Pétain appoints former Premier Pierre Laval - currently Minister of Foreign Affairs - as Vice-Premier and Minister of State. Laval is a firm believer that German total victory is inevitable, and this is often viewed as being pro-German, or, at the very least, "the agent of collaboration." This view is solidified by the fact that Pétain is more or less a figurehead figure in terms of day-to-day governance, while Laval handles the hard work of making arrangements with the Germans.

British Government: The British are shifting to a "battle of the periphery," where they confront the Wehrmacht in commando raids and secondary theaters (such as North Africa) rather than head-on. A Commando force is established which comes under the jurisdiction of the Combined Operations Headquarters. Admiral Sir Roger Keyes takes command, and he begins working up operations to start quickly. The nucleus of the new Commando force is composed of the men of the disbanded Independent Companies.

Related to this same strategic shift, Major Ralph A. Bagnold meets with General Archibald P. Wavell, the commander of the Middle East Command in Alexandria, Egypt. Bagnold sets forth a strategy whereby small, mobile groups of men will conduct long-range reconnaissance patrols behind the Italian lines in Libya. Wavell approves, allowing Bagnold six weeks to organize such a force, and gives Bagnold letters providing that his supply/personnel needs “should be met instantly and without question.” The Long Range Desert Group, popularly known as the "Desert Rats," is born.

Western Front: Some French holdouts in the Maginot Line refuse to surrender, but they are bottled up in fortresses and cannot do any harm. The only troops still "fighting" are Italian troops. A massive Italian force occupies the beach resort town of Menton - or, in Italian news summaries, the "strongly fortified town of Menton." In addition, the Italian troops in the Alps make some perfunctory attacks on the French dug in behind mountain passes.

Some evacuations continue at St. Jean de Luz pursuant to Operation Ariel. The Germans are not yet in possession of this region, which is under their administration pursuant to the Armistice. Today, they reach Rochefort and Royan.

French/Italian Relations: French and Italian representatives meet at Villa Incisa in the Roman suburbs. The French, which is the same group led by General Huntziger that just completed the armistice with Germany, are not as anxious to resolve the war with Italy as they had been with Germany. However, Mussolini is stage-managing the entire event (including the war itself) for propaganda purposes. His representatives Count Ciano and General Badoglio do not ask for very much in the actual armistice.

Soviet/Norwegian Relations: The Soviets demand access to the nickel mines at Petsamo.

Battle of the Atlantic: French destroyer Lansquenet is taken out of the Gironde Estuary under German artillery fire. The crew heads for North Africa on its own initiative.

Battle of the Mediterranean: Italian cruisers sortie near Sardinia, but they meet no French shipping. French aircraft sent to intercept them don't spot them.

In the Persian Gulf, three British destroyers and a sloop find Italian submarine Evangelista Torricelli off Perim. The destroyers blow the submarine up, but destroyer HMS Khartoum also goes down when one of its own torpedoes explodes on deck. The interception was possible due to papers captured on the submarine Galileo Galilei on 19 June.

The RAF bombs targets in Holland (Osnabruck and Hamm) and the Bremen/Hamburg area in northern Germany.

Egypt: The pro-British government of Aly Pasha Maher loses its support, but it is unclear what will replace it. In any event, the absolute British dominion over the country is not in doubt..

China: At the Battle of South Kwangsi, the Japanese 22nd Army captures Panli and Leishihhsu.

British Homefront: Three downed Luftwaffe airmen who perished in their Heinkel (shot down by ‘Sailor’ Malan) on 21 June are buried with full military honors (paid for by local RAF officers) at Chelmsford. The Bishop of Chelmsford officiates, and the RAF sends a wreath. In 1966, their graves are removed to the newly formed German Military Cemetery at Cannock Chase in Staffordshire.

Future History: Adam Faith is born Terence "Terry" Nelhams-Wright in Acton, London. He forms a skiffle group in the late 1950s and turns this into a long-lasting pop career. Faith has the first number one hit for Parlophone, a classical music label that later - perhaps partly due to its success with Faith - signs The Beatles after they have been rejected by other labels.

Wilma Rudolph is born in Saint Bethlehem, Tennessee. She becomes known as the fastest woman in the world in the late 1950s and early 1960s.

And, speaking of the Beatles, Stuart Sutcliffe is born on 23 June 1940 in Edinburgh, Scotland. Sutcliffe is the original bassist for the group. While extremely creative and a key figure (along with the friends that he brings into the Beatles' orbit) in the fabrication of the Beatles' memorable visual style, Sutcliffe's musical skills are lacking. He leaves the band before it becomes famous just like Pete Best. Stu Sutcliffe perishes in 1962 from a brain aneurysm and is remembered by many fans as the "Fifth Beatle." 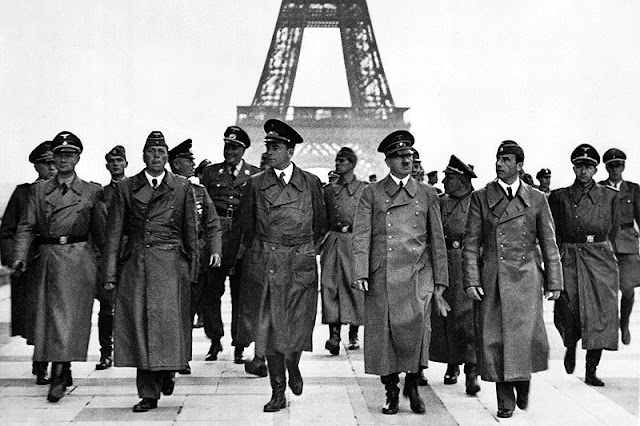