German/US Relations: On 11 December 1941, Adolf Hitler instructs Reich Foreign Minister Joachim Ribbentrop to deliver a formal declaration of war to United States Chargé d'Affaires in Berlin Leland B. Morris. The primary reason for this, as stated in the text of the declaration, is the order given by President of the United States Franklin D. Roosevelt on 11 September 1941 for US warships to "fire upon" Kriegsmarine war vessels "on sight." The United States Congress then votes to declare war on Germany within hours, passing the:


Joint Resolution Declaring That a State of War Exists Between The Government of Germany and the Government and the People of the United States and Making Provisions To Prosecute The Same.

Adolf Hitler gives a long speech to the Reichstag at the Kroll Opera House explaining this decision. President Roosevelt, however, merely sends down a written request to Congress asking for a declaration of war. 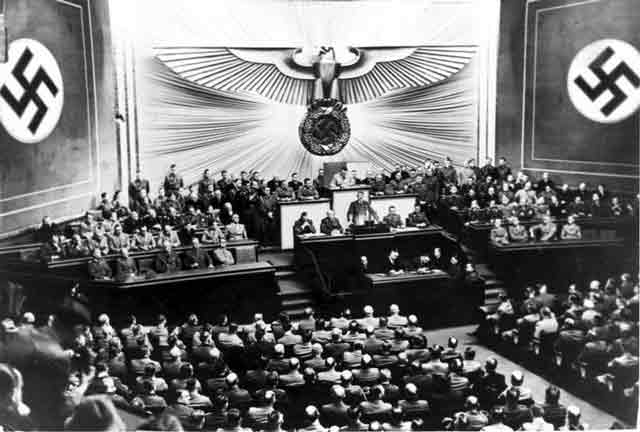 The Reich's declaration of war against the United States is considered Hitler's worst blunder of the war, topped only, perhaps, by his invasion of the Soviet Union. The reasons for Hitler's decision are debated, but his previous speeches indicate a deep resentment about the United States for flouting the international rules of warfare in support of Great Britain. Another possible motivation is to draw attention away from the Eastern Front, where the Wehrmacht is reeling due to the Red Army counteroffensive at Moscow. Hitler also is a creature of the Great War, and many of his strategies mirror those taken by the German Empire in that conflict. In this instance, Hitler adopts the thinking of the German high command in 1917 that unrestricted submarine warfare could finally isolate England and cause its eventual starvation and surrender. This would prevent United States intervention on the Continent and free the Reich's military to finally subdue the USSR. The strategy did not work in World War I, but perhaps Hitler thinks that the United States Navy is inadequate to fight a two-ocean war. In any event, the Reich is not bound by a treaty to support the Empire of Japan. While the Japanese Ambassador has sought such written assurance, the Reich has not provided them. In any event, Hitler never shows much deference to treaties regardless of how applicable they may be. This is Hitler's decision alone, made after four days of consideration, and stands as his only formal declaration of war.

Axis Relations: In Italy, Benito Mussolini issues a statement declaring war on the United States. Germany, Italy, and Japan, the original signatories of the Tripartite Pact, sign a new agreement that bars any of them from making a separate peace with either the United States or Great Britain. Various other countries declare war on one side or the other in the coming days, but the main battle lines now are drawn.

Battle of the Pacific: Four days have gone by at Pearl Harbor, and still the military in the Hawaiian Islands has no idea where the attackers of 7 December 1941 came from or where they went. The priority since the attack has been recovery and self-preservation, but no countermeasures. Today, the US Army Air Force finally attempts to find out, sending six Douglas B-18 Bolos to investigate the waters offshore. They find nothing: the Imperial Japanese Navy's main striking force, Kido Butai, is long gone.

The war in the Pacific proceeds much as it has since the first Japanese attacks, with steady Japanese gains and only occasional flashes of success by the Allies. Hong Kong's defenses are under artillery fire and aerial attack, and the British defenses on Kowloon and the New Territories already are crumbling. The British begin to evacuate all forces to Hong Kong Island, with no assurance that it can be held, either. In the Philippines, the Japanese already are on Luzon and heading south on Route 5 toward Tuguegarao and Laoag. They also embark 2500 men of the 16th Division for landings in southern Luzon to take place early on the 12th. On the Malay Peninsula, the Indian 9th Division of Indian III Corps begins pulling out of Kelantan, retreating from the airfields at Gong Kedah and Machang which the Japanese are now happy to use. The Japanese harass the retreating Indian troops as they head south.

At Wake Island, however, things are a bit brighter for the Americans, as the 1st Defense Battalion defeats attempted landings by the South Seas Force and even manages to sink destroyer Hayate (one survivor) using six 5-inch coastal defense guns. US Navy F4F-3 Wildcats, flown in less than a week ago, also bomb and sink destroyer Kisaragi (no survivors). The Japanese are forced to withdraw. US reporters, hungry for any positive news, make up a legend that the US commander on the island, naval aviator Commander Winfield S. Cunningham, USN, sends his superiors the cheeky message "Send us more [Japanese]" when asked what he needs. This charming invention makes headlines around the world, but it does sum up the feelings of many following the first United States success against the Empire of Japan. The Japanese, however, are not happy to lose two destroyers and hand the enemy a propaganda victory, so they immediately divert aircraft carriers Sōryū and Hiryū from Kido Butai (which is in the vicinity following its successful strike against Pearl Harbor) to help take Wake Island. The US Navy, meanwhile, is still unable to send any aid to the embattled US Marines and hundreds of civilian construction workers on the island.


The Reich's Declaration of War upon the United States:

The Government of the United States having violated in the most flagrant manner and in ever increasing measure all rules of neutrality in favor of the adversaries of Germany and having continually been guilty of the most severe provocations toward Germany ever since the outbreak of the European war, provoked by the British declaration of war against Germany on September 3, 1939, has finally resorted to open military acts of aggression.

On September 11, 1941, the President of the United States publicly declared that he had ordered the American Navy and Air Force to shoot on sight at any German war vessel. In his speech of October 27, 1941, he once more expressly affirmed that this order was in force. Acting under this order, vessels of the American Navy, since early September 1941, have systematically attacked German naval forces. Thus, American destroyers, as for instance the Greer, the Kearney and the Reuben James, have opened fire on German submarines according to plan. The Secretary of the American Navy, Mr. Knox, himself confirmed that-American destroyers attacked German submarines.

Furthermore, the naval forces of the United States, under order of their Government and contrary to international law have treated and seized German merchant vessels on the high seas as enemy ships.

Accept, Mr. Charge d'Affaires, the expression of my high consideration.