Battle of Britain: Luftwaffe attacks on 16 August 1940 focus on RAF airports today. RAF Tangmere suffers the most damage, with over half a dozen fields getting hit as well. While the Luftwaffe is taking serious losses, the RAF losses are not insignificant. The widespread damage to airfields and radar installations today actually makes it a rather successful day for the Germans, though of course, the British press can't know any of this.

There is a large operation around noon when 100 airplanes approach the Thames estuary. At the same time, a different formation makes landfall at Kent. A third attack by KG 2 crosses the coast at Dover. The Thames and Kent formations are intercepted, but the Dover formation gets through and hits RAF West Malling and Brize Norton, causing extensive damage at the latter (46 trainers destroyed).

About an hour later, another large Luftwaffe formation approaches from Cherbourg. This is primarily composed of Junkers Ju 87 Stukas of StG 2 and some Junkers Ju 88 bombers of KG 54. The escorts are from II,/JG 2 (Bf 109Es) and III,/ZG 76 (Bf 110s). The force splits up at the coast, with one group heading toward the Ventnor radar station, a second for RAF Tangmere, and a third toward Portsmouth and Gosport. RAF Nos. 1, 43, 601 and 602 Squadrons intercept. There is mass carnage, with the Luftwaffe losing 9 Stukas

The raid on the Ventnor radar station also is extremely effective, knocking it out for over a month. Hermann Goering's admonition against bombing the radar stations is proving unwise, and thankfully for the German cause is being ignored.

The attacks continue throughout the afternoon. Heathrow airport receives attention, but the attacking Heinkel He 111s of KG 55 lose six of their number. Another attack by Heinkels over Sussex at 17:30 results in four more bombers going down, and the last major raid of the day a little later, over Essex, results in another Heinkel going down along with several Bf 110s.

After dark, the Luftwaffe bombs the Bristol area, including the Filton airfield, Avonmouth docks, and a searchlight battery at Bristol.

The Luftwaffe damages trawler Regardo off the Isle of Wight and freighter Loch Ryan off of Land's End in Cornwall. The Luftwaffe also strafes fishing trawlers off the west coast of Scotland.

Flight Lieutenant James Nicolson shoots down a Bf 109 after being badly wounded and with his plane in the process of crashing. Nicolson has a very bad time of it, shot twice by the Germans and then once more by a Home Guardsman who mistakes him for a German. He earns the Victoria Cross for this. He survives.

Adolf Galland of JG 26, the top pilot in the premier Luftwaffe fighter formation, receives the Pilot's Badge in Gold with Diamonds.

Oblt. Karl Ebbighausen, Gruppenkommandeur of II./JG 26 is KIA, replaced by Hauptmann Erich Bode. Staffelkapitän of 4./JG 2 Oblt. Walter Möckel is shot down and becomes a prisoner.

American Pilot Officer W. M. "Billy" Fiske III is serving with the RAF and is mortally wounded during the Stuka raid on Tangmere. He is buried at St. Paul's Cathedral in London and is the only American in the RAF killed during the Battle of Britain.

The Luftwaffe once again takes the brunt of the damage - as long as you don't count the numerous RAF aircraft destroyed on the ground. Estimates vary widely as usual, but the Luftwaffe loses around 45 planes and the RAF around 30.

German Government: Today perfectly illustrates the confusion that permeates the German planning process. There are false estimates of British strength, plans drafted with great care for operations that cannot be made, and internal arguments.

Oberkommando der Luftwaffe (OKL) has little real information to go by other than pilot reports and confirmed kills. Today, the intelligence section of the OKL ("Section 5") estimates today that the RAF is down to 300 fighters defending England. The actual number is roughly 600, of which 200 are Spitfires.

The wrangling over Operation Sea Lion continues. Hitler orders the Army and the Navy to reach some sort of compromise. The Army wants a broad front, the Navy a narrow one. The Army began the process wishing to land 40 divisions but now concedes that it can make do with 13.

Hitler approves a plan for Operation Felix, the conquest of Gibraltar. No invasion of Gibraltar can be performed without Spanish intervention in the war, and that does not appear to be forthcoming any time soon.

Battle of the Atlantic: A wolfpack - a collection of U-boats operating as a group - is northwest of Ireland along the normal convoy route. Today, it scores several successes.

U-100 (Kapitänleutnant Joachim Schepke) torpedoes and sinks 4864-ton British freighter Empire Merchant in the Western Approaches. There are 49 survivors and seven crew perish. The Empire Merchant is an independent, zig-zagging at a fast 16 knots, and Schepke uses two torpedoes that hit the stern.

U-30 (Kapitänleutnant Fritz-Julius Lemp) torpedoes and sinks 6628-ton British freighter Clan McPhee in the Western Approaches. There are 41 survivors and 67 dead. They are picked up by Hungarian freighter Kelet.

U-48 (Korvettenkapitän Hans Rudolf Rösing) torpedoes and sinks 2325 ton collier Hedrun in the Western Approaches. There are 21 survivors, and 8 crew perish. Hedrun is traveling with Convoy OB 197.

U-46 (Kapitänleutnant Engelbert Endrass) torpedoes Dutch freighter Alcinous in the same area, but she is taken under tow and makes it to port.

U-51 (Kptlt. Dietrich Knorr) is spotted about 170 miles northwest of Tory Island by a Coastal Command Short Sunderland flying boat. A depth charge attack seriously damages it. While little is known about what happened afterward, it appears the U-51 could not submerge after this and headed back to Kiel.

British 1598-ton freighter Meath hits a mine and sinks northeast of Breakwater Rock Lighthouse. The 24 ton Manx Lad, a pilot ship, is alongside the Meath and goes down as well. Everybody survives.

The British 5309-ton freighter City of Birmingham hits a mine and sinks about 5 miles from the Humber River. Everybody survives. The cargo of copper and tin is quite valuable and worthy of salvage.

Norwegian ship Jaederen hits a mine laid by RN submarine Narwhal in the North Sea.

The British lay minefield BS.32 in the North Sea. 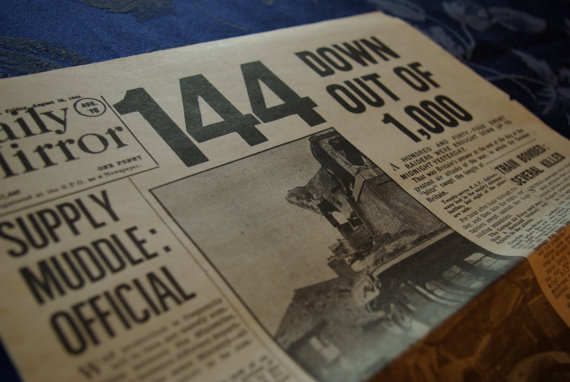 The Italians bomb Alexandria and sink local dockyard vessel Moorstone in shallow water where it can be salvaged. The RAF attacks Tobruk.

At Malta, there is an air raid alert at 07:41 which involves Italian aircraft offshore which do not attack. The War Office informs Governor Dobbie that Malta soon will be the base for seaborne raiders, but the size and scope of the force is not known yet. Dobbie is concerned about supplying them, as supplies already are quite tight on the island.

British Somaliland: The British begin pulling out of the country. British troopships Chakdina, Changala, Laomedon, Akbar, and Vita begin evacuating British troops from Berbera to Aden. Some of the Royal Navy ships are damaged slightly by air attack, but all continue operating. Tug Queen sinks during the operation. The Italians approach the British rearguard but do not attack.

The Italians are proceeding with circumspection in British Somaliland because of rumors of peace talks with the English via the Vatican. The Duke of Aosta, in overall command in Abyssinia, is said to be temperate in the pace of Italian operations as a result.

The RAF attacks Italian positions at Zeila and Adadleh.

Spy Stuff: The US makes progress in deciphering the Japanese codes.

US Government: President Roosevelt announces at a press conference that the US is considering the acquisition of British naval bases. He omits the fact that they will be exchanged for US Navy destroyers.

US Military: The US 29th Infantry Regiment begins parachute jumps with 48 men lead by Major William Lee as a possible beginning to the formation of US airborne units.

A lecturer at the University of British Columbia, Professor Henry Angus, accurately predicts a Japanese attack on Pearl Harbour.

Hitler meets with Vidkun Quisling, who is out of power and has been hosting a radio program.

Salvador Dali, previously based in Spain, arrives in New York for an extended stay.