Battle of Britain: The fickle finger of fate once again intrudes with a return of poor flying weather on 19 August 1940. Overall, at this stage of the battle, rainy and cloudy weather favors the British, as they are furiously repairing airfields and sorting out units for better defense against the rabid Luftwaffe attacks. The German aircrew along the French coast, on the other hand, get to reflect all day upon all the fine pilots, friends and leaders lost recently in a futile attempt to achieve a big fat nothing which has no lasting effect.

The Luftwaffe sends two large forces of fighters totaling about 100 planes over Dungeness and north of Dover. This is a classic "Freie Jagd," or unrestricted, mission. The RAF doesn't fear fighters without bombers and remains on the ground. Even random strafing missions on airfields such as RAF Manson, Lympne, and Hawkinge don't bring a response. A small formation of Junkers Ju 88s off Sussex does send fighters of RAF No. 602 Squadron up, and both sides lose a plane, with the bombers running for home.

There are some missions that produce results. Junkers Ju 88s hit Pembroke Dock in South Wales, setting 8 oil tanks at Llanreath ablaze. A portion of this attack hits RAF Bilbury, damaging a couple of Spitfires. Otherwise, there are just lone raiders on fields such as Worthy Down, Harwell, Coltishall, Honington and Shrivenham. These raids do kill people on the ground and destroy some aircraft on the ground (three Wellingtons at Harwell), but they are more nuisance attacks than strategic efforts.

During the night, the specially equipped Luftwaffe Heinkel He 111s of KGr 100 (a special group of 26 Heinkels, 12 typically operational) based at Meucon near Vannes in Brittany attacks the Bristol area and the aircraft factory at Filton. This attack does produce some effective destruction of the large plant. The planes are helped with their navigation by the X-Verfahren radio beams, an advancement on the Knickebein system under development since 1936. At this point, the British are not yet even aware of this particular system (though they know all about the less sophisticated Knickebein system).

RAF Bomber Command continues its raids on airfields throughout northwestern Europe. It also hits Kiel and continues reaching further into Germany proper, bombing the Zschornewitz electrical plant outside Leipzig. There is another lengthy (almost three hours) false air raid alert in Berlin, for only about the fifth time of the war. The alert is probably due to the relative nearness of the Leipzig attack and the uncertainty of where it is actually headed. Both sides, it should be pointed out, are still attempting (sometimes unsuccessfully) to limit their attacks to military targets of one form or another. However, mistakes do happen...

The Luftwaffe damages British freighter Waldinge off of Milford Haven.

Overall, the day's losses are usually given as 5-10 for the Luftwaffe and 2-5 for the RAF, but as usual, these figures don't include planes destroyed on the ground (by both sides). Overall, the day is pretty much a wash, with both sides taking the usual infrastructure damage.

German Military: Reichsmarschall Hermann Goering has another meeting at Carinhall. He is not happy, but then, all his recently lost pilots don't have even that luxury.

He officially suspends operations by Junkers Ju 87 Stukas in StG Staffeln in the interior of Great Britain. He keeps two Staffeln along the Kanalfront for "special situations" and withdraws the rest. The Stukas have produced good bombing results, but the losses are becoming insufferable: 57 lost since 8 August alone. Every bomber in the Luftwaffe is supposed to have dive-bombing capabilities, but the Stukas are the best that the Germans have for pinpoint attacks that are essential for taking out targets such as radar stations. Since Goering doesn't think the radar stations are worthwhile targets, they aren't really needed until the actual invasion anyway. Wolfram von Richthofen takes his VIII Fliegerkorps back to the Pas de Calais.

The limitations of the twin-engine Bf 110 Zerstörers also are addressed. The Bf 110s are beloved by Goering and the high command of the OKL, and in fact, they are quite capable planes. However, the Battle of Britain is proving that planes with rear gunners such as the Stukas and the Bf 110s are no match for top single-seat fighters like the Spitfire and Hurricane. Goering ordains that Bf 109s escort the Bf 110s. He also orders that escorts in general fly as close escorts, "tied" to the bombers rather than engaging in free-wheeling "Freie Jagds" favored by the fighter pilots. To encourage the fighter pilots to accept this change, Goering orders that they should become friends with the bomber crews and always escort the same bombers.

Neither the Junkers Ju 87 nor the Bf 110 is in any way "inferior" or "obsolete." In fact, both are used to the very end of the war with great success. The issue is their use against cutting edge fighters rather than missions better suited for their capabilities. Both planes develop new missions - the Stuka as a Soviet tank killer, the Bf 110 as a night fighter - that add to their legends.

Goering's changes, on the whole, reflect at least an acceptance of the facts, even if they aren't necessarily the most effective solutions (tying fighter and bomber formations together throughout campaigns is particularly problematic). As is so common in the German regime, though, these fairly reasonable tactical changes aren't the only thing he does: there must be some cathartic bloodletting as well. Luftwaffe formation commanders begin getting the ax. JG 52 is the first to feel the pain, with Major Merhart von Bernegg, replaced by Major Hanns Trübenbach as Kommodore. If there is one thing that you can count on with Hermann, it is finding a handy scapegoat or two.

Battle of the Atlantic: There are several U-boats operating in the same area off of northwest Ireland. This group is a proto-wolfpack which has great success.

U-48 (Korvettenkapitän Hans Rudolf Rösing) sinks 7900-ton Belgian passenger ship Ville de Gand right around midnight on 18/19 August (I also have this on the 18th). There are 38 survivors and 15 perish (accounts vary).

U-101 (Kapitänleutnant Fritz Frauenheim) torpedoes and sinks 4576-ton British freighter Ampleforth in the same area near Ireland at 01:54. There are 29 survivors and 9 crew perish.

U-A (Kplt. Hans Cohausz) torpedoes 4295-ton British freighter Hungarian Kelet in the same area at 10:00. There are 68 survivors and 6 perish. The Hungarian Kelet had rescued crew from the Clan Macphee which sank on 16 August, and of the 41 survivors taken aboard from the Clan MacPhee, all six deaths during this sinking were from the Clan Macphee (leaving 35 total survivors from that ship). This is actually a fairly common occurrence, survivors are often taken aboard ships that themselves are torpedoed later, and survivors for some reason usually seem to be in greater jeopardy than usual during the subsequent sinking. (This would make a good Twilight Zone episode when it's your time, it's your time....).

There are two separate unsuccessful attacks by Italian submarines where they are operating off the Azores. The Malaspina misses a tanker, and the Barbarigo attacks the British freighter Aguila but also misses.

Battle of the Mediterranean: The RAF attacks Derna Harbour, oil storage tanks at Bir el Gobi, and the airfield at El Gubbi.

There are two air raids on Malta during the day, but the Italian aircraft stay offshore. A few more Blenheim bombers arrive for offensive missions.

The Malta Fighter Plane Fund announces that it has reached its target of £6000 (Spitfires actually cost a bit more than that), so it launches a second drive for another plane. Contributions are seen as highly patriotic, and many people with titles and all that are eager to contribute to show they are "in it to win it."

Postal rates to Malta are raised to limit the amount of mail being sent by air.

British Somaliland: With the British having evacuated on the 19th, the Italians cautiously occupy Berbera today. HMAS Hobart remains around in the harbor during the day to give the Italians a proper rousing welcome and blow up various items that couldn't be removed to Aden. The Italians have lost roughly 2000 men during the campaign (estimates vary) and the British only 38 dead and 222 other casualties, but the campaign is a huge British embarrassment and a black eye to British prestige despite a competently fought campaign under the circumstances.

Losing to the Italians is particularly galling to British Prime Minister Winston Churchill, who has been openly and caustically belittling their fighting ability for years. The campaign took only 16 days. Churchill now nurses a grudge against Middle East Commander General Wavell, one of the most highly respected General in the world. Hitler is jubilant, sending Mussolini a message that it is "a great victory in East Africa, a foretaste of British ruin to come at home."

German/Spanish Relations: Abwehr chief Admiral Canaris is back in Madrid seeing if he can get Spanish support for projected Operation Felix, the invasion of Gibraltar.

Estonia: The Soviets seize two Estonian submarines (Kalev and Lembit) and some other ships. "Seize" may be too harsh a word, since Estonia is now an SSR and technically part of the Soviet Union. As the Soviets see it, the USSR is merely "seizing" its own assets, or one might say just "transferring" them. However, much of the local population doesn't quite see it that way.

China: Zero fighters (A6M2) have been operational with the 12th Rengo Kōkūtai since July, but they have been used only for training so far. Today, in their first combat mission, a dozen of them (Model 11) escort 54 G3M2 Type 96 "Nell" bombers over Chungking. The Chinese are still using ancient biplane fighters in the defense which are no match for the cutting edge Zeros.

British Homefront: The Children's Overseas Reception Board begins evacuating children to Australia. Heretofore, evacuations were usually to more rural areas of England where parents could visit on the weekends (and also some to Canada), so this is a bit of a wrenching change for many.

American Homefront: The Gallup organization publishes a poll showing that Americans approve of the destroyer-for-bases deal by a 62-38% margin.

Future History: Jill Arlyn Oppenheim is born in Los Angeles, California. Jill becomes a child actress, appearing on the radio as early as 1946 and on television in "A Christmas Carol" in 1949. At some point, her mother changes Jill's last name to something more distinctive, and as Jill St. John she becomes a top Hollywood actress, a Bond girl and marries Robert Wagner. She remains active in the film industry as of this writing. 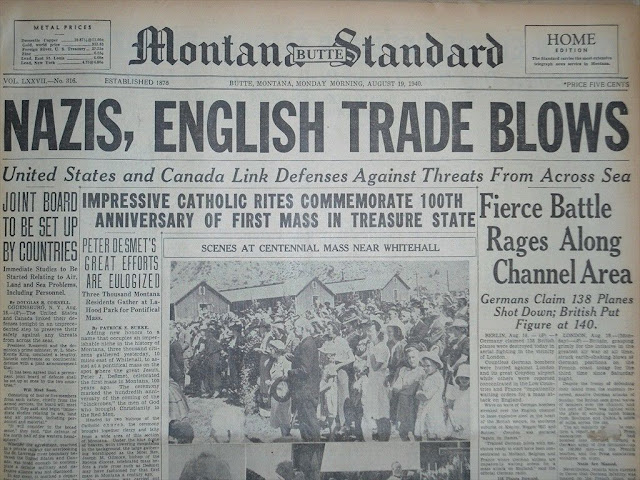