Battle of the Pacific: As of 16 December 1941, the brunt of the fighting by US forces against the advancing Japanese has been carried out in the air. Even there, the successes have been few and far between, but at least there have been some successes and even outright heroism. Today, 1st Lieutenant Boyd D. Wagner of the 17th Pursuit Squadron (Interceptor), 24th Pursuit Group (Interceptor), becomes the first US Army Air Force "Ace" of World War II. Wagner accomplishes this during a dive-bombing raid on the Japanese airfield at Vigan, the Philippines.

At dawn in Borneo, part of the Japanese 16th Division lands at Miri and Seria. Later in the morning, forces also land at Lutong. The Japanese invasion forces are not large, but they don't need to be - there is virtually no opposition. The first objective of all three landings are some nearby airfields where the Japanese want to base their aircraft. Dutch forces in the area retain control of their airfield near Miri and have relatively large aerial forces there that plan to bomb the Japanese land positions and offshore naval support on the 17th. This begins the Battle of Borneo.

On the Malay Peninsula, the tenuous British line anchored at Gurun dissolves after only a day or two of fighting. the 11th Indian Division under the command of Major-General Murray-Lyon resumes its march south toward Singapore with the Japanese 5th Infantry Division (Takuma Nishimura) in hot pursuit.

At Hong Kong, the Japanese control the mainland while the Commonwealth forces are completely isolated on Hong Kong Island. The Japanese prepare to make landings on the island in a couple of days. The British know their position is essentially hopeless, but they have nowhere to go and Her Majesty's Government expects its possessions to be defended.

Battle of the Mediterranean: General Erwin Rommel oversees a withdrawal by Afrika Korps from the Gazala line to El Agheila. The 15th Panzer Division, down to eight tanks, moves quickly enough to block an attempt by the British 4th Armored Brigade to cut off their retreat from the south. The British do have opportunities to advance anyway, but they only send a small unit north which finds 15th Panzer's rear echelon troops but not the main force. The rest of the British tanks head south to refuel, giving the panzers just enough time to get in position to block any further British attempts to block the retreat. With the Axis retreating in good order to a new line between Ajedabia and El Haseia and the British unable to pursue, this is generally considered the end of British Operation Crusader. It has been a close-run and limited success which achieved its main objective of relieving Tobruk but failed to trap and destroy the Afrika Korps despite several tempting chances to do so. General Rommel, meanwhile, has had to abandon large German forces near the frontier at Bardia and Sollum which continue to hold out but whose situation is hopeless. It is the first real British land victory over the Afrika Korps.

The big issue on land for the Axis is whether convoys can successfully supply Rommel's panzers and bring reinforcements. To this end, a major Italian supply convoy departs from Naples bound for Axis headquarters in Tripoli. Aerial reconnaissance has spotted two British battleships in Grand Harbor at Malta, so the Italian fleet swings into action. The force includes a massive (but fairly distant) escort of four battleships, five cruisers, and 21 destroyers - one of the largest Italian fleet movements of the entire war. In command is Admiral Iachino. As with most Axis convoys to North Africa, the first stop is Palermo, Sicily.

Eastern Front: After a fairly long stay in Berlin, Adolf Hitler returns to the Wolfsschanze in East Prussia. Field Marshal Ritter von Leeb, commander of Army Group North, is there to meet him. Hitler uncharacteristically gives von Leeb permission to withdraw from the entire Tikhvin salient and blames the retreat on bad advice from the OKH. At noon, Hitler turns his attention to Army Group Center. He has General Franz Halder, OKH Operations Chief, telephone Field Marshal Fedor von Bock at Smolensk and also give Ninth Army, Third Panzer Group, and Fourth Panzer Group permission to retreat. One thing is made abundantly clear to everyone: Army Commander Field Marshal Walther von Brauchitsch is no longer in the chain of command, and Hitler personally is making all the decisions. Rather than contact von Brauchitsch, von Bock from now on is to communicate with Hitler's aide, Generalmajor Rudolf Schmundt. Schmundt privately tells von Bock's chief of staff, General Greiffenberg, that Hitler is "taking everything into his own hands."

After his conversation with von Bock, Schmundt calls Hitler and gives him a full picture of the front. At midnight, Hitler, at his evening conference, calls von Bock and changes all previous orders. From now on, the Army Group Center is:


not to go a step back to close the gaps and hold.

Hitler promises infantry and air reinforcements. Von Bock knows that such promises are easy to make but hard to keep and protests that it may take too long for any help to arrive and the front "could rip open at any hour." The Fuehrer replies:


I will have to take that chance into the bargain.

Hitler then hangs up.

Saturday 21 March 1942 The German relief force attacking toward the Demyansk pocket, 21 March 1942. Eastern Front:  Having made a rap... 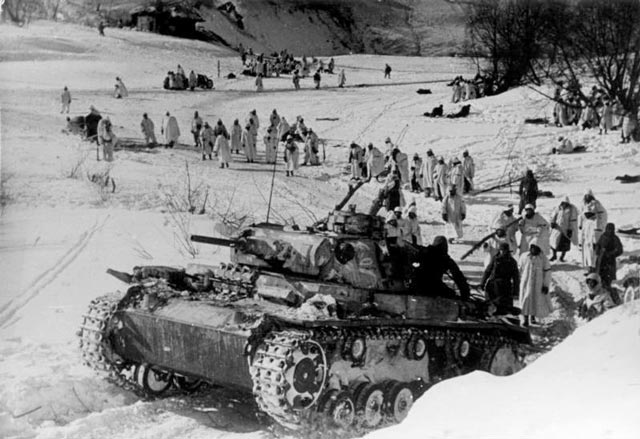