Operation Menace: The Allies on 24 September 1940 remain offshore of Dakar during Operation Menace, with the Vichy French sitting tight. Both sides are lobbing shots at each other, but the basic situation remains unchanged. During the day, the British battleship HMS Barham, sitting 13,500 yards (about 8 miles) offshore, lobs in some 15-inch shells that strike the French battleship Richelieu sitting in port. The Richelieu, unfinished, also has issues with its guns, with 380mm guns 7/8 in Turret 2 going out of service today when a shell explodes. However, the port defense guns aren't fully manned, so some Richelieu crew just switch to coastal guns, where they have success. The biggest problem for the Vichy French is ammunition, as they are using old powder which causes problems.

The Vichy French have submarines in the area, and shortly after sunrise the British force sub Ajax to surface. This is a joint exercise between Swordfish operating from the Ark Royal and patrolling destroyers. The Swordfish bomb the submarine and force it to surface. The Vichy French crew then scuttles the badly damaged sub. Destroyer HMS Fortune rescues the 61-man crew. There are different versions of this action in which the destroyer, and not the planes, cause the sub to surface and scuttle, and likely it was some combination of forces.


The British fleet approaches the port in the morning, but retreats under fire around 10:00, then approaches in the afternoon again, then retreats. British battleship HMS Resolution, for its part, takes damage which eventually requires it to be put under tow down to Cape Town, South Africa. Barham and two British cruisers are damaged by coastal defense guns manned by the Richelieu crew.

The Vichy French retaliate for the attack by sending 64 aircraft based in Morocco and Algeria over Gibraltar. They drop 150 bombs on the British base and cause damage to the dock area, especially the South Mole area. This attack is somewhat unusual because heretofore the Armée de l'Air de Vichy bombers have made perfunctory runs and dropped many of their bombs out at sea. Somewhat perversely, this is the largest air raid of the war to date by the French Air Force, including the Battle of France. 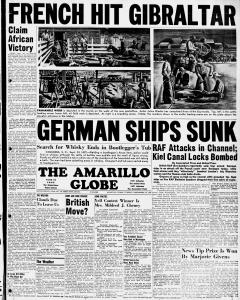 Battle of the Atlantic: The Luftwaffe bombs and sinks classic 1815 ship of the line HMS Wellesley at its dock on the Thames. The ship sinks in shallow water and can be salvaged, but it is damaged beyond repair. HMS Wellesley has the distinction of being the last ship of the line to be lost in enemy action and the only one lost by air attack. Its figurehead now graces the entrance to Chatham Dockyard.

The Luftwaffe bombs and sinks 169 ton British trawler Bass Rock about 40 km southwest of County Cork, Ireland. Four crew perish and four perish, that's the lottery of the Battle of the North Atlantic, pick your number and take your chances.

Royal Navy 20 ton motor torpedo boat HMS MTB 15 hits a mine and sinks 56 km northeast of North Foreland, Kent (Thames Estuary) in the North Sea. These carry a complement of 9-12 men, and it is unclear if there are any survivors.

HMS Tuna torpedoes and sinks 1280 ton submarine tender ("catapult vessel") Ostmark southwest of Saint-Nazaire in the Bay of Biscay. The Ostmark is a Deutsche Lufthansa vessel on its way to Germany for commissioning into the Kriegsmarine, and the plan is to use the Ostmark to launch long-range reconnaissance aircraft from Brest (contemplated as the new main U-boat base in France). So, technically, it is not a loss for the Germany Navy. However, the loss is noticed in Berlin and is an early indication to the Germans that the Atlantic coast shipping area is vulnerable and security there needs to be upgraded - a turn to the defensive. The Tuna, for its part, is having an excellent patrol, having sunk the Tirranna on the 22nd.

British submarine Cachalot spots an unidentified U-boat in the southwest approaches and fires torpedoes, but misses.

German cruiser Admiral Hipper leaves Wilhelmshaven to attempt to break out into the Atlantic, but soon loses all engine power due to a fire in the engine oil feed system. It drifts aimlessly for several hours before repairs are effected and the ship can return to Hamburg for more permanent repairs.


Battle of Britain: The morning is foggy, but clears up rapidly. While bombing is fairly light and mainly on secondary targets, there is intense fighter activity throughout most of the morning.

The first Luftwaffe attacks begin around 08:30. This time, it is 200+ plane formation that includes a large formation of Junkers Ju 88s. RAF Fighter Command sends up 11 squadrons, which intercept the Luftwaffe planes over the Thames Estuary. The bombers turn back, some badly damaged, and the fighters engage in dogfights which result in some RAF losses.

Around 11:00, the Luftwaffe sends over more planes. One force attacks coastal towns, but Adolf Galland's JG 26 is hunting for RAF fighters over the Thames Estuary and finds them. Both sides lose a plane.

An eerie calm descendes around noontime. Luftwaffe pilots jokingly praise the "Anglo-Saxon custom of lunch" for such quiet period. However, things heat up again soon thereafter.

The Luftwaffe sends more fighters over during the early afternoon. RAF No. 41 Squadron loses a couple of planes. Some Bf 110s of  I./Epr.Gr 210, 4./ZG 76 and III./ZG 76 then raid Southampton and Portsmouth, bombing the Woolston Spitfire factory. A "lucky" hit on a shelter there kills 100 workers, but the factory itself is unscathed. For some reason, Fighter Command does not intercept this formation, accounting for its great success, but anti-aircraft fire downs three of the fighter-bombers.

Around 16:00, another formation crosses near the Isle of Wight. This time, Fighter Command intercepts and downs four bombers.

After dark (which is coming much earlier now), the Luftwaffe targets London, Shoreham, Portsmouth, Plymouth, Hull, Humberside, Newcastle, Manchester, Middlesborough and South Wales. The London West End takes some damage, as does Westminster. The attacks are widespread and scattered, causing fairly random damage. The largest raid is on Liverpool, which is bombed by II,/KG 27 from midnight until first light. RAF Feltwell takes some damage during the final raids of the night.

Overall, losses are fairly light on both sides. The Luftwaffe loses about 10 planes (depends how you count the several bombers heavily damaged but which make it back to France), while the RAF loses about half that number.

Adolf Galland gets credit for his 40th claim. The victim is ace Harold Bird-Wilson of RAF No. 17 Squadron (baled out badly burned into the Thames, picked up by a riverboat). Galland is hot on the trail of Werner Mölders, who has a few more victories at this point. This victory entitles Galland to the Oak Leaves, which he receives at the hand of Adolf Hitler. Hitler, aware of Galland's somewhat impertinent comment to Reichsmarschall Goering in August, jokes with Galland about also wanting a squadron of Spitfires.


European Air Operations: RAF Coastal Command attacks the ports of Zeebrugge and Brest, while Bomber Command attacks Berlin with 20 bombers, Frankfurt, the German coastal guns at Cap Gris Nez, and the usual ports and airfields in northwest Europe. By far the greatest effort is made against the invasion ports, where the barges are gradually dispersing.

Battle of the Mediterranean: Italian submarine Scirè departs La Spezia, Italy carrying three special manned torpedoes. Its mission is to drop off the torpedoes, which then will penetrate Gibraltar Harbour and sink large Royal Navy ships (which, apparently unknown to the Italians, are operating off Dakar). Prince Junio Valerio Borghese, who has trained with U-boats in the Baltic, is in command of this prestige assignment. Italy leads the world in the area of manned torpedoes.

At Malta, it is a quiet day with no air raids. The island receives word that three warships are on the way (arrival date unknown) carrying supplies, so unloading parties are put on standby throughout the day. Arriving ships must be docked and unloaded immediately so they can depart again to avoid air/naval attack.

Anglo/US Relations: The formal transfer of the third tranche of US destroyers is made pursuant to the destroyers-for-bases deal at Halifax. The destroyers are:


French Indochina: The Japanese 5th Infantry Division seizes Lang Son, where the French briefly held out due to the airfield there. Fighting continues further south.

The government announces that 444,000 children have been evacuated from London and plans to evacuate more.

American Homefront: Jimmie Fox, 32, of the Boston Red Sox hits home run No. 500 in a game against the Phillies. He is only the second man to do so and trails Babe Ruth, retired since 1935, by 214 home runs. He is the youngest to reach 500 home runs until Alex Rodriguez in 2007, but Foxx has health issues of one form (exactly what and why is controversial) which impair his skills going forward.