German Military: Pursuant to Adolf Hitler's statements that Operation Sealion could be set in motion with "four or five days" of a maximum Luftwaffe effort, Reichsmarschall Hermann Goering on 16 September 1940 holds a meeting with his top lieutenants to announce another change in strategy. The supposed coup de grace on the 15th did not go as planned, with little damage to London and huge losses to the Luftwaffe.

Everybody in the German High Command is confused because the RAF was supposed to be kaput. The bomber guys blame the fighter pilots for being late to their stations, while the fighter jocks point their fingers at the bombers for taking so long to get into formation, thereby giving the RAF plenty of warning

Goering rather belatedly comments that the change of strategy to bomb London was a poor idea. He issues new orders to his commanders to return to the earlier strategy of bombing RAF airfields while bombing London at night. At this point, however, the constant changes in objectives and advanced season are wearing on the Luftwaffe's morale, not to mention the staggering losses taken on the 15th of September, "Battle of Britain Day." The results of that day, though, pretty much seal the case that the Luftwaffe is not, in fact, winning the battle, so tinkering with strategy at this point is increasingly futile. 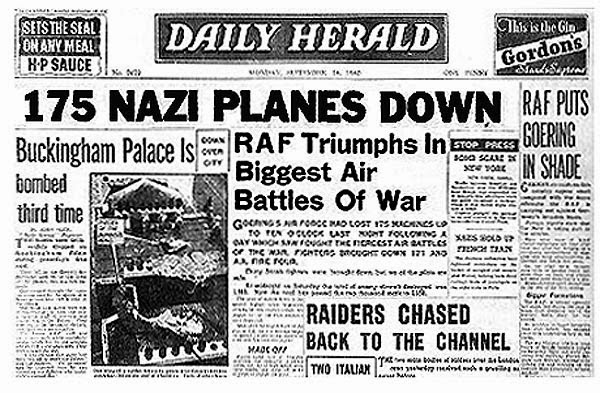 British Military: Air Vice Marshal Park of No. 11 Group also has a meeting. While everyone is happy with the turn in the battle, Park does some tinkering of his own:
Overall, things are going well for the RAF, but the Luftwaffe's numerical superiority remains.

Battle of Britain: The weather is poor, and Luftwaffe attacks are light. A raid at 07:30 toward London fizzles, with the bombers turning back after Fighter Command mounts a full-scale interception.

A later fighter sweep by Bf 109s of JG 51 achieves little, with RAF Fighter Command slow to intercept and getting in little combat (and the German fighters accomplishing little).

During the night, the Luftwaffe sends over heavy formations. The Germans drop 200+ tons of bombs on London's dock areas and the residential areas of Bethnal Green West Ham, East Ham, Hackney, and Shoreditch. The Bristol area takes damage, as do Liverpool and Manchester. In a typical incident of poor bombing accuracy, bombs fall on the golf course at Hebburn.

Otherwise, Luftwaffe raids are minimal and scattered. A Pirateneinsatze ("Pirate Raid") by a Heinkel He 111 targets the Bristol Aeroplane Company at Filton, a favorite Luftwaffe target, but the pilot apparently gets lost and returns to base.

There are few claims filed, with the score for the day generally considered to be in single digits for both sides, with an advantage for the RAF. Major Werner Mölders of JG 51 shoots down a Hurricane for his 38th victory.

The coastal guns at "Hellfire Corner" exchange salvoes in the morning without causing much damage.

European Air Operations: The RAF focuses on the invasion ports, sending 155 bombers against Antwerp, Calais, Ostend, Dunkirk, and Veere. In addition, Bomber Command targets barge convoys at Ostend and Zeebrugge and the usual airfields in northwest Europe. During these raids, the British capture the Germans engaged in the practice of amphibious landings for Operation Sealion, causing casualties. The poor weather keeps the bombers on the ground after dark.

Battle of the Atlantic: The British continue their erratic approach toward Vichy French ships today. One day they fire on them, the next they allow French warships to pass by unopposed. Today, they resume attacking them.

South of Dakar, British cruiser HMS Cumberland - on patrol as part of Operation Menace - spots 4185 ton Vichy French freighter Poitiers heading for Dakar. After taking off the crew, the Cumberland sinks it with gunfire.

U-99 (Kplt. Otto Kretschmer) continues to stalk Convoy SC 3. at 02:41, it torpedoes and sinks 1327 ton Norwegian freighter Lotos just northeast of Rockall (off the coast of Ireland). Everyone on board (17 men) survives.

U-59 (Kptlt. Joachim Matz), on her 12th patrol, torpedoes and sinks 4616-ton British collier Bibury in the Atlantic south of Iceland. All 39 onboard perish.

Dutch 5918 ton freighter Stad Schiedam (City of Schiedam) sinks south of Bermuda due to a suspicious explosion. While terrorism is suspected at the time, it now is believed that the old ship (launched in 1911) had mechanical issues that caused sparks, igniting its load of sulfur. Everyone survives, the 12-man crew spend five days in a life raft in the middle of the Atlantic before being picked up by a passing freighter (SS White Crest).

British 4098 ton freighter Incemore runs aground at East Cape on Anticosti Island, Quebec and is a total loss.

The Luftwaffe bombs and sinks 6588-ton freighter City of Mobile (formerly Kentucky) in the Irish Sea near Portaferry, County Down. Everybody on board survives.

The Luftwaffe also bombs and sinks 8323-ton troopship HMT Aska. There are about 300-600 survivors, while 30 people perish (sources vary because multiple ships picked up survivors and landed them at different places). The ship is loaded with French troops from West Africa. The ship burns and drifts for days before finally sinking near Gigha. While it sinks in shallow water, it is never re-floated.

British destroyer HMS Holderness is damaged by a mine in the North Sea and requires repairs.

Battle of the Mediterranean: The Italians complete their offensive. They send 50 tanks and supporting artillery toward Alam el Dab, near Sidi Barrani, in an attempt to outflank the British. The British continue withdrawing, this time from Alam Hamid to Alam el Dab. They engage in scorched earth demolitions as they go, suggesting they don't expect to be returning any time soon. The Italians (1st Blackshirt "23 Marzo" Division) occupy Sidi Barrani by sunset. The coast road in this area has an alternate route on cliffs overlooking the road, and the Italians advance on the road while the British retreat on the cliffs.

The Italians make various threats over Italian radio to continue their advance toward the railroad station at Mersa Matruh, 70 miles further down the coast road. In fact, they stop at Sidi Barrani and dig in. Eventually, they form a chain of fortified encampments in an arc reaching into the desert. They also occupy all the points they bypassed, such as Buq Buq and Sidi Omar, and repair the road and lay a water pipe (the Italians are awesome road-builders in the desert). The British set up a defensive line in front of Mersa Matruh and leave the 11th Hussars forward as a screening force.

While the media at the time claims that the Italians suffered thousands of casualties a day, in fact, their total casualties are about 550 men. The British, in turn, suffer very few casualties, retreating in good order to their railhead, and this time Churchill is more appreciative of an efficient withdrawal than he was in British Somaliland. Both sides engage in fighter sweeps on their enemy's advanced positions, to little effect.

The entire Italian offensive accomplishes little beyond occupying the worthless ground, but it fulfills Mussolini's desire to look like Hitler's partner. He has other projects in mind anyway, in Albania. However, Mussolini chafes at his army's inactivity and continually prods Marshal Graziani to resume the offensive toward Matruh, which is planned for December. As Mussolini tells Graziani, he just wants the army to attack, not occupy places:


Once again I repeat that there are no territorial objectives. It is not a question of aiming for Alexandria nor even Sallum. I am only asking that you attack the British forces facing you.

Graziani, however, is a cautious commander, is worried about his supply line and the size of the British forces opposing him, and goes no further.

The Royal Navy sallies from Alexandria. During the night, HMS Illustrious launches an air raid on the Italian base at Benghazi. The British also mine the harbor there. The Italian fleet there takes a beating, losing two destroyers and two cargo ships during the day. Cruiser HMS Kent independently shells Bardia and is badly damaged by torpedo planes.

At Malta, Governor Dobbie warns that the island is running out of food stores. The island does, however, have ample fuel stocks with strict rationing. Everything is vulnerable to bomber attack, so the government is building underground storage tanks. 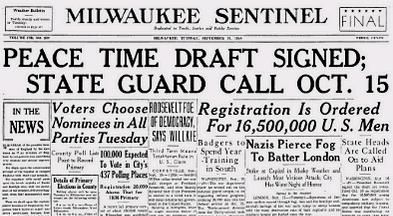 Battle of the Indian Ocean: German raider Pinguin captures 4111-ton Norwegian freighter Nordvard. The Germans put a prize crew on board the Nordvard and send it off toward Bordeaux, where the captured Norwegian crew will be forwarded on to their country.

German/Soviet Relations: The Soviets take notice of the Wehrmacht troops using their new transit rights in Finland (they are en route to Narvik) and are concerned. Of course, they would be a lot more concerned if they knew what was going on in Fuehrer Headquarters.

German/Spanish Relations: Spanish Minister Serrano Suñer visits Berlin to discuss Germany's request for bases in the Canary Islands and elsewhere. He indicates that Spain would require a lot in return and, in effect, denies the request.

Free France: General Georges Albert Julien Catroux, recent commander of French Indochina, arrives in London. He joins the Free French movement, having met General Charles de Gaulle during World War I. Catroux is the most senior officer of the French Army to transfer allegiance (including de Gaulle) and becomes the commander-in-chief of the Free French forces (under de Gaulle).

New Caledonia pledges its allegiance to the Free French upon the appointment of Governor Henri Sautot of New Hebrides to replace Governor Pélicier.

US Military: Cruiser USS St. Louis, carrying the Greenslade Board, arrives in St. John, Newfoundland to inspect the new US base there (transferred as part of the destroyers-for-bases deal).