Operation Marita: In an event of worldwide importance, on 27 April 1941 the Wehrmacht enters and occupies Athens at 09:25. German soldiers immediately climb up to the Acropolis beside ordinary tourists and raise the Swastika flag. The Wehrmacht troops, fueled by vast supplies of oil and related valuable items captured in the capital, continue south, pursuing the retreating Commonwealth troops.

The 1st SS Panzer Division Leibstandarte SS Adolf Hitler ("LSSAH," still of brigade-size) completes its crossing of the Gulf of Patras to take the key port of Patras at 17:30. However, it is an empty victory because the British forces have chosen to evacuate from other ports such as Nafplio. In addition, Wehrmacht troops advancing through Athens already have advanced into the Peloponnese and relieved the Fallschirmjäger (German paratroopers) of Operation Hannibal that was holding the Gulf of Corinth. While the rapid LSSAH advance south from Ioannina across the Gulf of Patras was an outstanding technical achievement, in a military sense it becomes essentially superfluous. However, it greatly enhances the reputation of the formation, and plans are made to expand it to division size.

While the British troops largely escape the Wehrmacht ground forces, they are not quite so lucky with the Luftwaffe. Nine Junkers Ju 87 Stukas of Sturzkampfgeschwader 77 attack a troop convoy fleeing from Nafplio in the Peloponnese. They bomb and sink Dutch troopship Slamat, which is part of a convoy carrying 3,000  British, Australian and New Zealand troops (the Slamat only has a portion of them). Two Royal Navy destroyers, HMS Diamond and Wryneck, pick up as many survivors as they can, but as they head to Suda Bay, Crete, the Luftwaffe Stukas sink them, too. A total of roughly 1,000 British troops perish, with only 8 troop and 11 crew survivors from the Slamat, 20 from the Diamond, and 27 from the Wryneck.

The German 5th Panzer Division advances rapidly south through Athens and down to the Corinth Canal. It throws across a temporary bridge on or about this date and heads south toward the fleeing British.

The Luftwaffe continues its depredations against Greek shipping in the Aegean, sinking:
The Luftwaffe damages other Greek ships, including 2113 ton freighter Danapris at Piraeus, which the Germans later repair. 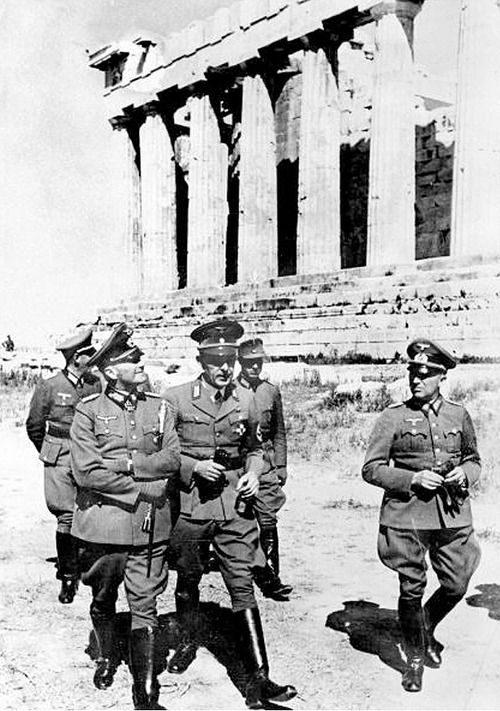 Iraq War: Diplomatic efforts continue to defuse the tensions in Iraq, where the Rashid Ali government refuses to allow additional British troops into the country. The British ambassador informs Ali's government that additional troops are at sea and bound to arrive at Basra any day. Within Iraq, the British troops are secure but unable to travel by land between their bases. However, their airlift capability is unimpeded, so the British airlift elements of the British 1st Battalion of King's Own Royal Regiment from RAF Shaibah to RAF Habbaniya, where Iraqi troops have assembled. 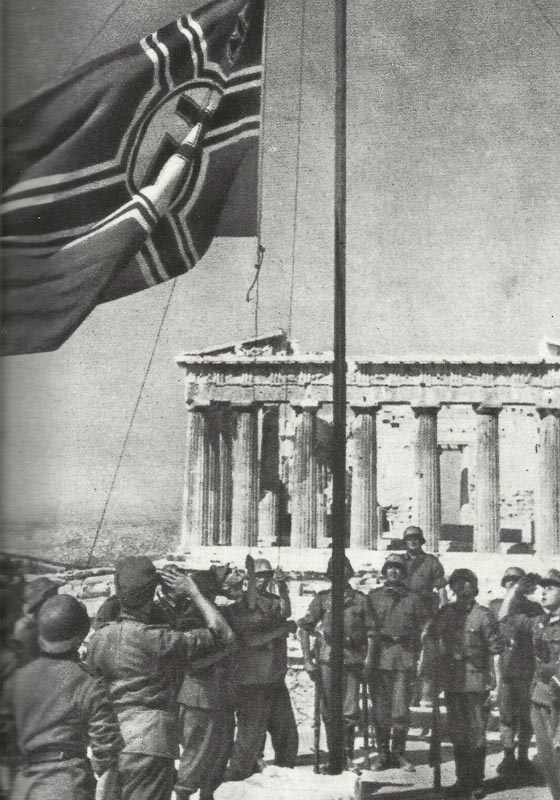 Battle of the Atlantic: U-552 (K.Kapt. Erich Topp), on its second war patrol, torpedoes and sinks two ships south of Iceland:
U-147 (Oblt.z.S. Eberhard Wetjen) torpedoes and sinks independent 1334-ton Norwegian freighter Rimfakse about 240 km northwest of Scotland. There are eight survivors and eight deaths.

The Luftwaffe bombs and sinks 943-ton British freighter Celte west of the Faroe Islands. Everyone survives.

Royal Navy sloop HMS Rosemary collides with 754-ton British freighter Carrickmacross at Milford Haven. It is under repair at the port until 6 June.

Norwegian freighter Rimac collides with Royal Navy transport HMT Lord Plender off Great Yarmouth. The Rimac sinks, and five of its crew perish while 14 survive. There also are three deaths on the Lord Plender, which rescues the Rimac's survivors.

The shifting Admiralty position on Vichy ships changes again. After ocean boarding vessel HMS Maron intercepts five French freighters escorted by a patrol boat between the Canary Islands and Africa, the Sea Lords direct that the ships be released and allowed to proceed to Dakar.

Despite recent military successes in North Africa, the German high command has become increasingly leery of Lieutenant General Erwin Rommel's conduct of operations there. Among the concerns is Rommel's decision to stage a major offensive before receiving all of the troops en route to Tripoli - the fact that the offensive was wildly successfully does not enter into this assessment. Rommel repeatedly disregards orders sent by either the OKH and his Italian military superiors. The Germans cannot know this now, but that is one of the keys to Rommel's successes since the British are reading German communications but Rommel just disregards them. When the OKH orders something and then Rommel does something else, the British are caught flat-footed.

To assuage their concerns, the OKH (Oberkommando des Heeres, army high command) sends staff officer Friedrich Paulus, a Deputy Chief of the General Staff, to Tripoli to investigate the situation. Paulus later recalls that he was offered command of the Afrika Korps in place of Rommel, but turned it down. However, Paulus does assume control of operations during his tenure in the theater and cancels a planned offensive against Tobruk pending his later approval.

In the field, the Germans consolidate their recent gains in the south. Gruppe Herff sets up outposts at Sidi Suleiman, about ten miles east of the British lines. Some of its units are sent north through Sollum in preparation for a renewed attack on Tobruk - which depends upon General Paulus' approval.

The Luftwaffe attacks Australian artillery positions in Tobruk in preparation for the planned assault. The Luftwaffe employs level bombers to attract anti-aircraft fire while Junkers Ju 87 Stukas pound the anti-aircraft guns. The attack is successful, with four guns destroyed and 8 killed at a cost of one bomber. The Australian defenders set up dummy gun emplacements and move the artillery.

Royal Navy submarine HMS Usk (Lt. G.P. Darling) hits a mine and sinks near Cape Bon, Tunisia. All 32 men on board perish.

Italian freighter SNA7/2679 hits a mine and sinks off Cape Bon, Tunisia. There also is a theory that HMS Usk, believed lost on this date, sank SNA7/2679 before itself sinking, but this is unconfirmed.

The Luftwaffe bombs and sinks 8672-ton Dutch transport Costa Rica north of Crete. Costa Rica is part of Convoy GA 14, and everybody aboard is rescued.

Convoy GA 14 departs from Suda Bay, Crete to free up space for the transports soon to arrive from the Greek mainland.

American/Dutch/British/Australian Relations: A military meeting (the "ABDA" conference) in Singapore between the (future) allies ends with an agreement on combined operations in the event of Japanese aggression. The United States, which sent only junior officers led by Captain William R. Purnell to the meeting, takes the plan lightly, with the US War and Navy Departments rejecting the plan. The British, Dutch and Australians, who already are at war with Germany but not yet Japan, take the plan extremely seriously.

German Government: After a brief stop in Maribor/Marburg and a return trip to Graz on the 26th, Adolf Hitler embarks on his command train "Amerika" for the trip back to Berlin.

British Government: Winston Churchill addresses the nation on the BBC. He has a somber tone, as Churchill knows that Greece is lost and the British have lost their last foothold on the European mainland. He crows about the inability of the Germans to invade Great Britain, noting that


with every week that passes we grow stronger on the sea, in the air and in the number, quality, training and equipment of the great armies that now guard our island.

Of Middle East Commander General Archibald Wavell, he notes that "we cheered in good days and will back through the bad." He then turns to the Axis leaders and Italian leader Mussolini a "whipped jackal" and Hitler "that bad man" prone to "raving outbursts." He essentially places all of England's hopes on America, concluding with an Arthur Hugh Clough poem that has the last line, "But westward, look, the land is bright."

Visiting Australian Prime Minister Robert Menzies meets with US Ambassador to Great Britain John Gilbert Winant. Menzies writes in his diary that Winant agrees with him that, in terms of the news media, "most stuff going to the USA is of German origin." The AP, for instance, continues to obtain photographs from Germany through its Lisbon contacts. Menzies jots down that "news to America badly handled." Churchill muttered darkly during his BBC broadcast about supposed tensions between Australia and England due to German propaganda, and if Menzies' private thoughts are any indication, such tensions do indeed exist.

Holocaust: Reichsführer-SS Heinrich Himmler inspects the Mauthausen concentration camp. Mauthausen is a Category III camp and perhaps the most brutal in the entire system.

The Croatian Ustashi militia kills an unknown number of civilians in the Serbian town of Gudovac. There is no love lost between the Croats and the Serbs, with the Croats firmly in the German camp while the Serbs back Great Britain.